Karachi, 19 November 2020: Following an 11-day break during which the HBL Pakistan Super League 2020 playoffs and final were held at Karachi’s National Stadium, the Quaid-e-Azam Trophy first-class tournament resumes with the fourth-round matches from Friday.

The four-day tournament has seen a hugely competitive start with seven out of the first nine matches producing results. 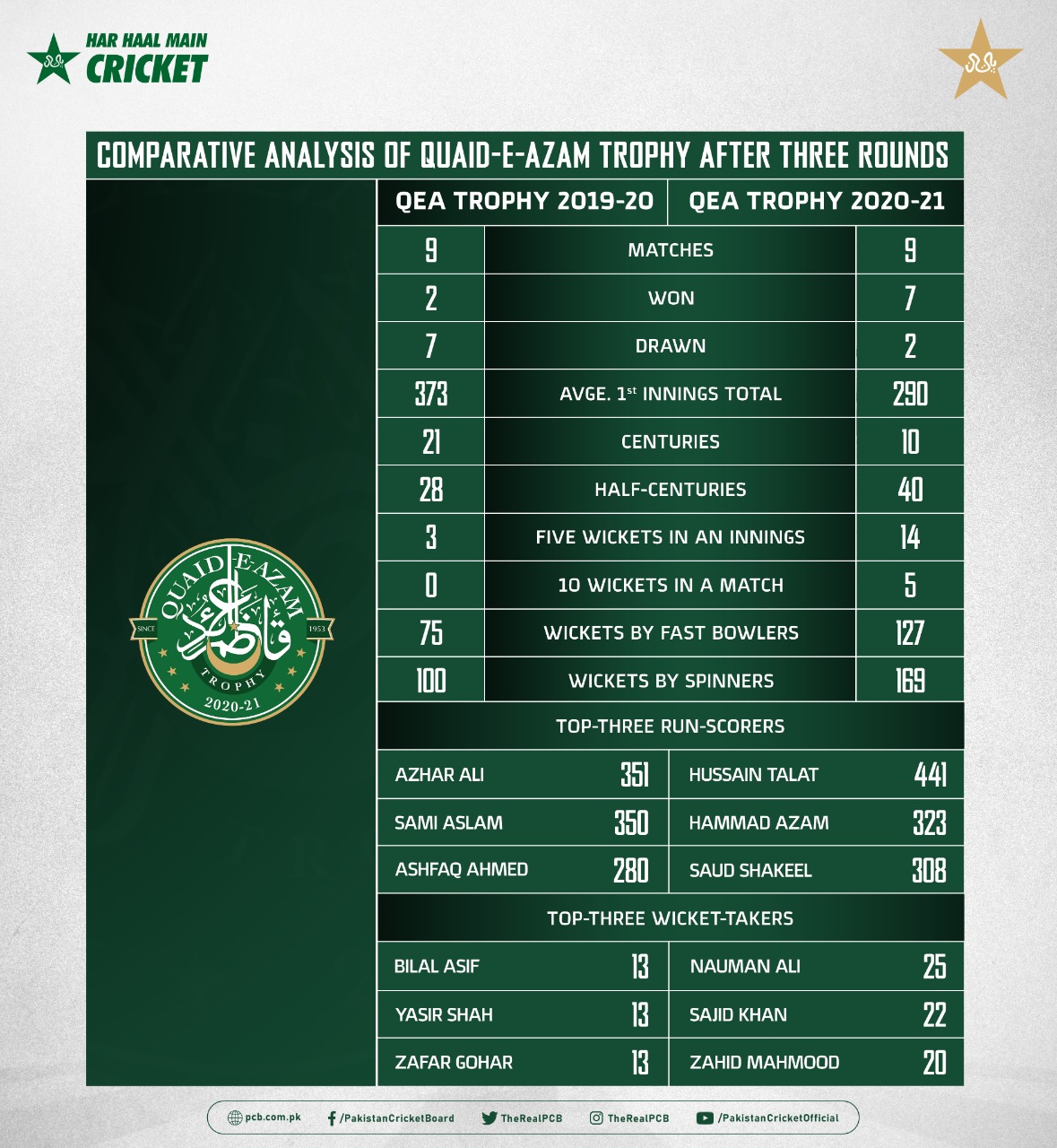 Southern Punjab lead the six-team table with 55 points while defending champions Central Punjab are languishing at the bottom with a mere 16 points courtesy two defeats and one draw.

Following the announcement of the 35-player contingent for the New Zealand tour, the six head coaches were provided a window to rejig their squads by promoting top performers from Second XI teams, picking reserve players or selecting a maximum of three of those cricketers from the other Cricket Associations who are yet to feature in first-class cricket this season.

While most of the coaches promoted players from the lower-rungs, Central Punjab had batsman Tayyab Tahir transferred from Southern Punjab.

The table-toppers will take on fourth placed Sindh in the televised fixture at the National Stadium. The match would be broadcast live on PTV Sports with the PCB YouTube channel providing delayed stream of the encounter.

The Umar Siddiq-led side would hope to continue their domination and earn an outright win or enough points to secure their position at the top of the table. Besides Umar, the Southern Punjab management would be pinning hopes on Zeeshan Ashraf, Saif Babar, Mukhtar Ahmed and vice-captain Imran Rafique to provide solid runs.

The squad includes an accomplished bowling line-up that is led by Bilawal Bhatti and includes the likes of Mohammad Ilyas, Dilbar Hussain and the prolific leg-spinner Zahid Mahmood who has collected 2o wickets in the tournament so far.

The Asad Shafiq-led Sindh (36 points) have lost Sarfaraz, Fawad Alam and Sohail Khan as the trio is a part of the New Zealand-bound squads. The 77-Test veteran Asad would be aiming to regain his batting form after losing his middle-order batting spot in the Test squad.

The left-handed Saud Shakeel, who smashed a brilliant 174 in Sindh’s loss to Northern, will be the linchpin in the Sindh top-order and would be now hoping to shoulder extra responsibility after his elevation to the vice-captaincy.

Besides Asad and Saud, Sindh possess a formidable batting line-up in Omair-Bin-Yousuf, Saad Ali and Shehzar Mohammad. The seasoned Tabish Khan will lead the attack which also includes Mir Hamza and the exciting pacer Shahnawaz Dahani.

Shahnawaz along with leg-spinner Abrar Ahmed have been picked-up from Sindh Second XI squads following impressive performances in the Second XIs three-day tournament.

Balochistan have won one game, drawn one and lost one match so far to collect 44 points. With Yasir Shah unavailable, veteran Imran Farhat will lead the side and their batting charge. Balochistan also will not have their prolific batsman Imran Butt who has been rewarded for an impressive run in first-class cricket with a spot in the 35-member New Zealand bound squad.

Farhat will now be banking on Azeem Ghumman, Akbar-ur-Rehman (both promoted from Balochistan Second XI) and Taimur Ali to provide him runs.

Nauman Ali-led Northern (52 points) would once again be relying on their prolific captain to spearhead their victory bid in the match. The left-arm-spinner Nauman has taken 25 wickets and at present occupies the top-spot in the bowling charts.

Asif Ali, Ali Sarfaraz and Umar Amin will lead the batting firepower after the departure of Zeeshan Malik as part of the New Zealand bound squad. Youngster Nasir Nawaz has been promoted from the Northern Second XI after some impressive performances.

Defending champions but currently bottom-placed Central Punjab have all to play for in their fixture against Khyber Pakhtunkhwa at the UBL Sports Complex. After Azhar Ali’s departure, fast bowler Hasan Ali has been named captained of the side with seasoned batsman Usman Salahuddin his deputy.

Khyber Pakhtunkhwa will be led by Khalid Usman. They are currently placed fifth in the table with 33 points after having won one, lost one and drawn one game. Vice-captain Israrullah, Adil Amin, Musadiq Ahmed and Mehran Ibrahim (elevated from Khyber Pakhtunkhwa Second XI) will be hoping to make big runs for the side.

The bowling attack is led by Imran Khan Snr. Sameen Gul and Arshad Iqbal are two young and talented speedsters in the squad. Off-spinner Sajid Khan, who has taken 22 wickets in the first-three rounds, will be the bowling trump card for his captain.

Meanwhile, Tayyab Tahir is the only player who was transferred using the transfer window that was created after the exit of the 35 players from the tournament. Batsman Tayyab was transferred from Southern Punjab to Central Punjab.

Adnan Akmal will miss the fourth round after testing positive prior to his departure for Lahore.

Kamran Akmal will be travelling to Sri Lanka for participation in the Lanka Premier League while Sami Aslam has informed his team management that he is not available due to “personal reasons”.

Two coaches are also completing their quarantine periods, following which they will join their respective sides. The revised squads are available below.