The initiation of this national event stems from our programming and management capability to generate an ESSENTIAL cricketing activity for aproximately 44,500 club cricket players across the country. NO other cricketing activity in Pakistan can have such great outreach for only Rs. 1,450/- rupees per player per year, and dovetail into the existing system for verifibale and predicable results within six months! At present, all our cricketing activity/reach revolves around approximately 6,000 players of all age groups, with a very low refresh rate.

It is for this reason that we keep investing in existing players without tapping into the enormous resources that are available on tap. Club cricket is the backbone of all cricket activities in Pakistan. There are hardly five regions across Pakistan that hold regluar club tournaments, that dovetail into our cricketing system. Due to lack or organized cricket in clubs, selection in inter-district tournaments and other tournaments become an exercise that is NOT performance based, since no performance data is available for these new players.  Furthermore, unlike other boards, PCB also does not have any data on these players. In most instances, existing players keep getting selected, and the system suffers from stagnation.

2849 Club teams will participate in 97 districts across Pakistan. Hence at the end of the tournament there would be 97 district champions and thus 16 regional champions. 2 pools comprising of 8 teams each will be formed and a national champion will be emerged after the final which will be televised live on TV.

This tournament will, in essence, create a paradigm shift in how PCB conducts all its domestic cricket activities. 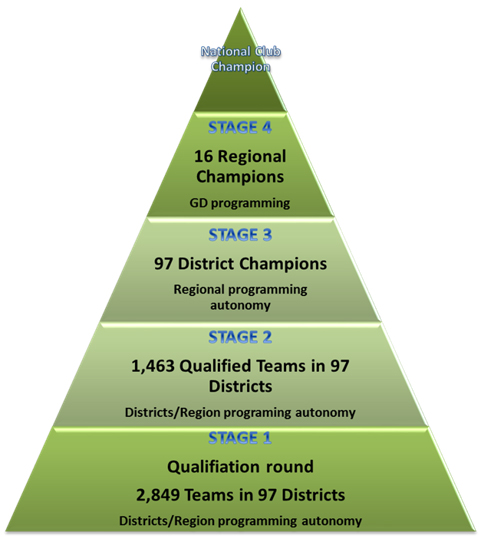