Lahore, 19 October 2022: One of the major stories since the introduction of better and more competitive domestic structures has been Sindh’s inability to secure berth in any of the last three finals of the first-class Quaid-e-Azam Trophy.

The team representing one of the strongest nurseries of cricketers could not win a first-class match and finished second last in the 2019-20 edition, finished last the next season with one win and five losses and missed out on a berth in the final by seven points in the last season to Khyber Pakhtunkhwa, who went on to win the title for the second time on the bounce.

This season, however, things have been different. Sindh have emerged as one of the stronger sides. After the first four rounds, they are placed second after an emphatic win against the defending champions yesterday.

That their win over Khyber Pakhtunkhwa was emphatic was because of Abrar Ahmed. The 24-year-old mystery spinner’s impeccable spells that perfectly blended leg-breaks with sly execution of googlies had Khyber Pakhtunkhwa, who were trailing by 106 runs, fending off an innings defeat for the majority of the latter half of the four-day match at the Pindi Cricket Stadium, Rawalpindi.

Khyber Pakhtunkhwa could set only a three-run target and Sindh completed the win, by now turned into a cakewalk, with a Khurram Manzoor boundary on the third ball.

Abrar took five wickets for only 29 runs and this was his third five-wicket haul in four innings. During the haul, he reached the 50-wicket milestone in what is only his ninth match. Abrar has had a dream start to the current first-class season. He joined Sindh in the third round (at the end of Pakistan’s T20I series against England) and immediately made an impact, returning two five-wicket hauls against Southern Punjab and finishing with 11 wickets in the match. He took five for 94 and six for 100 as the match ended in a draw.

Though Abrar’s stock delivery is leg-break, he is quite unusual in comparison to other leg-spinners as he uses his finger rather than wrist. He delivers googly and flipper with his fingers, making it difficult for batters to pick him.

“I assess the batters and conditions when I am bowling. While fielding, I keep a close look on how the batters are using their feet, which areas are they trying to target and what is their strength,” Abrar told PCB Digital after bowling his team to their first first-class win of the season.

Abrar made his first-class debut for Sindh in the 2020-21 season and quickly announced his arrival, finishing as the third highest wicket-taker for his team. In the next season, though he played only two matches, he recorded two five-fers and finished with 17 wickets. What made him stand out was his average, which was the best for any bowler that season with more than 10 wickets. 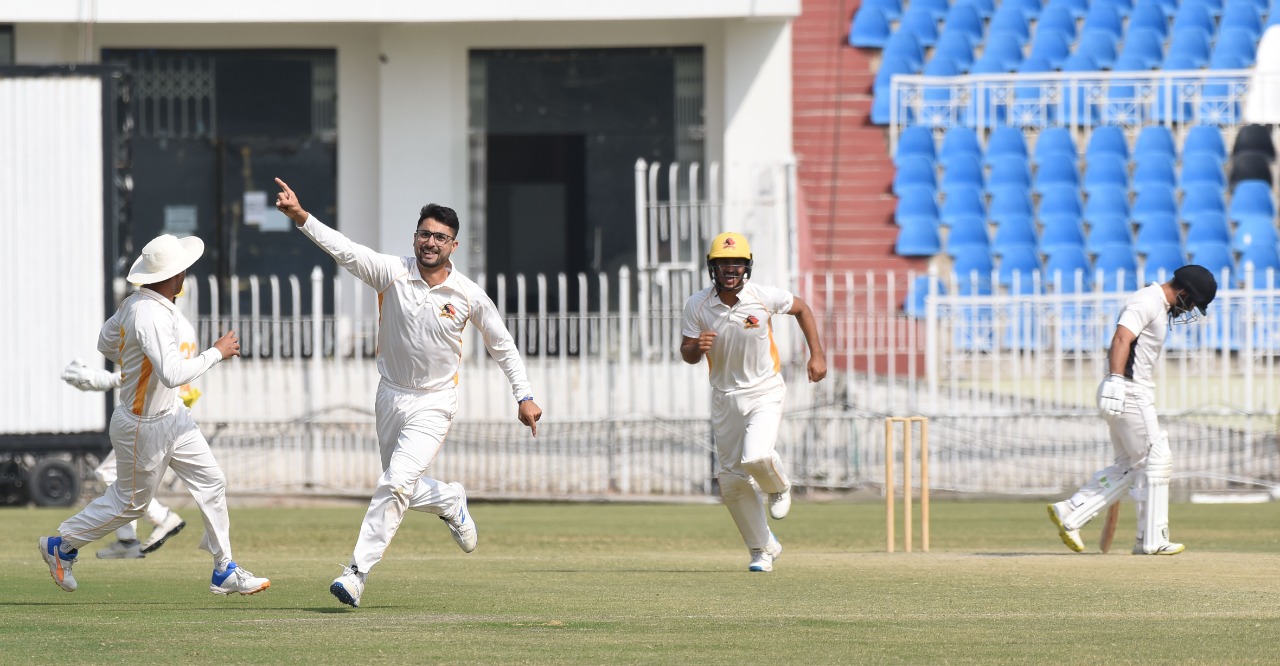 As he has matured as a spinner, the deployment of his googly has become more effective. “Previously, my googly used to slide down the leg,” he says, “I worked on landing it in the right areas and that has reaped rewards.”

One of the most critical aspects of leg-spin bowling in first-class cricket is to choose the right moment to bowl the googly. So, when does Abrar know when to unleash it? “You have to set up a batter with leg-breaks before you bowl a googly,” he responds. “The set-up is the most critical bit in leg-spin bowling. My googly is a secret weapon and I have to deploy it only when the time is right.

Despite playing only two matches this season, Abrar leads the Quaid-e-Azam Trophy bowling charts with 20 scalps at a phenomenal average of 17.

Abrar recently received a maiden national call-up when England toured Pakistan for historic seven T20Is in September-October. Though, he was called up as a back-up option, the experience of sharing the dressing room with the best cricketers in Pakistan and being guided by one of the best coaches, widened his knowledge that is bound to help him as his career progresses.

“It was a great pleasure and honour for me to share the dressing room with some of the greatest contemporary cricket stars. The presence of Saqi bhai [Saqlain Mushtaq, head coach] in the capacity of the head coach helped me a lot. We discussed plans and the art of bowling spin. I am sure that the time I spent with the national side will help me in becoming a better leg-spinner.”

He hopes of donning Pakistan colours soon – in all three format, but until that happens, Abrar will continue to hone his skills in whites for Sindh.

“Playing first-class wicket is very important for a bowler,” he says when asked about the importance of playing the format. “The batters attach a very high value to their wickets here and you have to work extraordinarily hard to get them out.”

Sindh play their next match against Balochistan from 21 October at the Pindi Cricket Stadium.