In the end the tournament actually mattered – if for nothing else but the inclusion of Sohail Khan, a nod by the Pakistan selectors (as admitted by Moin Khan) to the domestic game. The 2014/15 Pentangular Cup was supposed to be the final chance for many to stake their claims for the ICC World Cup 2015 squad. Sohail was the only one on the outside who ended up being selected, although all 10 of his wickets came in two matches after going wicketless in the other two games.

The other high performers, the likes of Azhar Ali, Sami Aslam and Raza Hasan, could not supposedly make a strong enough case for anything better than the standbys for the World Cup squad.

It was the sort of tournament that ought to be more frequent in the domestic game – 75 of the (arguably) best players featuring against each other in a tournament where, for once, quality took precedence over quantity. And yet how it came about and what happened there is of interest to anyone concerned about the future of the domestic game.

In many countries, the counties or states are powerful entities with decorated histories and actual fan-bases. In Pakistan, though, the Pakistan Cricket Board (PCB) has an unusually large role in the running of the game and the control over the finances within it. There is one advantage of this however – it allows the focus to be on the national team all the time. And I doubt the modern Pakistani fan would mind that. There is no possibility of a county versus country debate that used to happen in England until a decade or so ago. 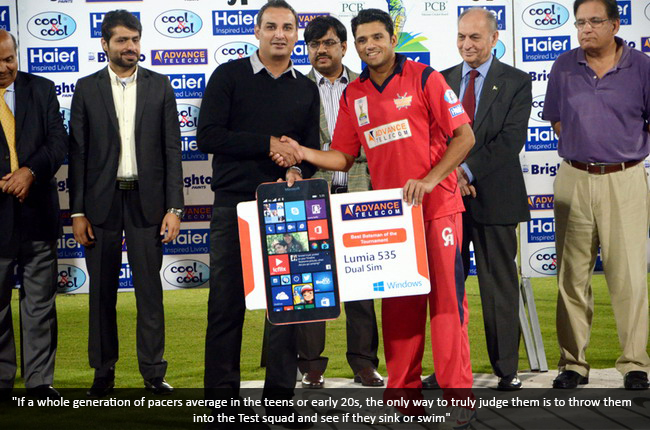 Furthermore, it is not like the domestic calendar is set in stone; it seems to change every year, on the fly. Thus the domestic season provided the PCB with a chance to manage it in such a way as to give the national team the best chance to succeed in the World Cup, something else that has an unnecessarily large role in Pakistani cricket. They could have filled the first half of the season with 50-over matches to pick the cream from the crop, and played First Class games in the second half of the season once the World Cup squad had been announced, allowing those on the outside to stake their claims for the Test and ODI teams after the World Cup once the current oldies retire.

The result, instead, was that until late December only T20s and First Class matches were played. The only List A cricket played prior to the naming of the World Cup squad was half the Pentangular, and nothing else.

Of course that is just the tip of the iceberg. The far bigger issue is how bipolar the statistics for the domestic game are. The First Class game is supposed to be the academy for the Test squad, where the focus right now (as has been far too frequently over the past decade) is on trying to produce pacers who could help the team take 20 wickets consistently in Test cricket. Instead, the First Class tournaments are played on under-prepared pitches (for reasons that are too lengthy to go into right now) with variable bounce and too much help for the seamers. The result is that you cannot differentiate between the mediocre and the really good.

If a whole generation of pacers average in the teens or early 20s, the only way to truly judge them is to throw them into the Test squad and see if they sink or swim. That, quite frankly, is not efficient. In the Quaid-e-Azam Trophy Gold League this year, there were 19 bowlers who ended up taking over 25 wickets at an average under 25; add that to the high performers in the Silver League (the likes of Sadaf Hussain and Najaf Shah) and you have a pool that is far too big to judge from. This, of course, is nothing new.

In the premier First Class competition last season, the President’s Trophy, there were 23 bowlers who ended up with 25-plus wickets at under 25. For comparison, in the 2014 County Championship, supposedly the home of swing and seam, there were only eight bowlers who managed to fulfil these parameters. Thus what we get is too many bowlers who rely on the conditions (and even the better ones bowling within themselves as they know) and a generation of batsmen who are not used to scoring big in the long formats.

The List A game has the opposite problem: 14 of the 16 highest scorers in the Pentangular ended up averaging over 50, with the other two averaging in the 40s. Again this means that it’s difficult for the very good to separate themselves from the crowd, and thus selection becomes completely subjective – something that has meant that far too often the undeserving end up playing for Pakistan.

Of the 70 odd players in List A cricket worldwide who average in excess of 42, there are 16 Pakistanis – 11 of whom are active players (12 if we include Salman Butt), and three of the remaining four have played as recently as the 2011/12 season. Thus the only one prior to the current lot who was this good was Javed Miandad. So either Pakistan has an extremely talented group of limited overs batsmen right now, or the dead flat wickets created for the List A games help create flat-track bullies who feast on the diluted quality of bowlers who rely too heavily on conditions. Based on how the national team has batted in the recent past, it is fair to say the latter is the likely case. Thus in the domestic 50 over game, where the priority is to separate the batting cream (after all, the 50 over game is more of a batsman’s game than the other two formats), the tournaments again fail to achieve their chief objective.

Despite a rather troubling start, Pakistan may end up doing reasonably well in the ICC Cricket World Cup 2015 but just seven weeks should not allow us to sweep such problems in the domestic game under the carpet. It's time the PCB's internal think tank came up with solutions for the anomalies pointed above.