Karachi, 22 October 2020: Following a highly successful white-ball National T20 Cup, which concluded on 18 October, attention now moves to first-class Quaid-e-Azam Trophy, which commences in Karachi on Sunday, 25 October. The white-ball event was held under Covid-19 protocols, which were planned, delivered and implemented by the PCB staff, including officials from the medical, high performance and security departments.

The inaugural six-team first-class Quaid-e-Azam Trophy 2019-20 tournament, under the revamped structure, was full of excitement and competitive cricket, which produced absorbing and thrilling four-day cricket that captured the imagination of all stakeholders and fans alike.

After years of the ball dominating the bat on bowler-friendly pitches, the PCB decided to improve the quality of the pitches in order to make them sporting while proving equal chance to both batsmen and bowlers, especially spinners.

The international class Kookaburra balls were used in the 31-match season that was spread over three-and-a-half months and played across the country. In addition to this, 10 matches were live-streamed on the PCB YouTube Channel for the first time, while the five-day match was broadcast live by the then PCB’s media rights partner.

Quetta returned to the domestic cricket fold as matches were staged at the Bugti Stadium after 11 long years. The final-leg (last two rounds and the five-day final) were staged in Karachi to ensure completion of matches without weather interruption, a practice that had been successfully carried out in the last few years.

Babar Azam-led Central Punjab won the tournament by defeating the youthful Northern side by an innings and 16 runs in the final held at the Karachi’s National Stadium.

Central Punjab would start the tournament as favourites to retain the title; some of the highlights of the 2019-20 season are reproduced below.

Batting achievements in the Quaid-e-Azam Trophy 2019-20:

A total of three batsmen crossed the 900-run mark in the season. Balochistan’s Imran Butt topped the batting charts with a tally of 934 runs at 62.26 in 17 innings. The right-hander posted four centuries with a highest of 214.

Central Punjab’s seasoned wicketkeeper-batsman Kamran Akmal scored 906 runs in 15 innings at 60.40, his tally of runs included three centuries with a best of 166.

Central Punjab opener Salman Butt was third on the list with a tally of 901 runs in 15 innings at 75.08; the left-hander hit three centuries including a best of 237.

A total of 77 centuries were scored by 46 different batsmen from the six Cricket Association teams.

Sindh’s Abid Ali posted the highest score of the tournament; the right-hander hit 249 not out in his team’s first-round match against Balochistan at the UBL Sports Complex, Karachi. A total of eight double centuries were hit during the tournament.

The 500-run mark in an innings was passed no less than 11 times during the tournament, Central Punjab posted the highest team total of the 2019-20 edition when they piled on 675 for eight declared against Northern in their only innings of the final.

The highest partnership of the 2019-20 season was the 358-run second-wicket partnership between Zeeshan Malik and Umar Amin for Northern against Southern Punjab at Sialkot’s Jinnah Stadium.

Bowling achievements in the Quaid-e-Azam Trophy 2019-20:

While batsmen dominated the Quaid-e-Azam Trophy 2019-20 season, there were a number of match-winning bowling performances which challenged the batsmen and made the tournament a compelling watch. A total of 26 five-wicket (innings) and three ten-wicket (match) hauls were recorded during the tournament.

Northern’s Nauman who captained his side in the lead-up and in the final was the tournament’s leading wicket-taker with 54 wickets in 10 matches at 25.38. The left-arm spinner took five wickets in an innings a total of five times.

Zafar took 38 wickets in his 11 appearances for Central Punjab at 36.76 with one five-wicket haul.

Amongst fast bowlers Sindh’s Tabish Khan was the leading wicket-taker with 25 wickets in 10 matches which made him occupy the sixth-spot on the bowlers list. 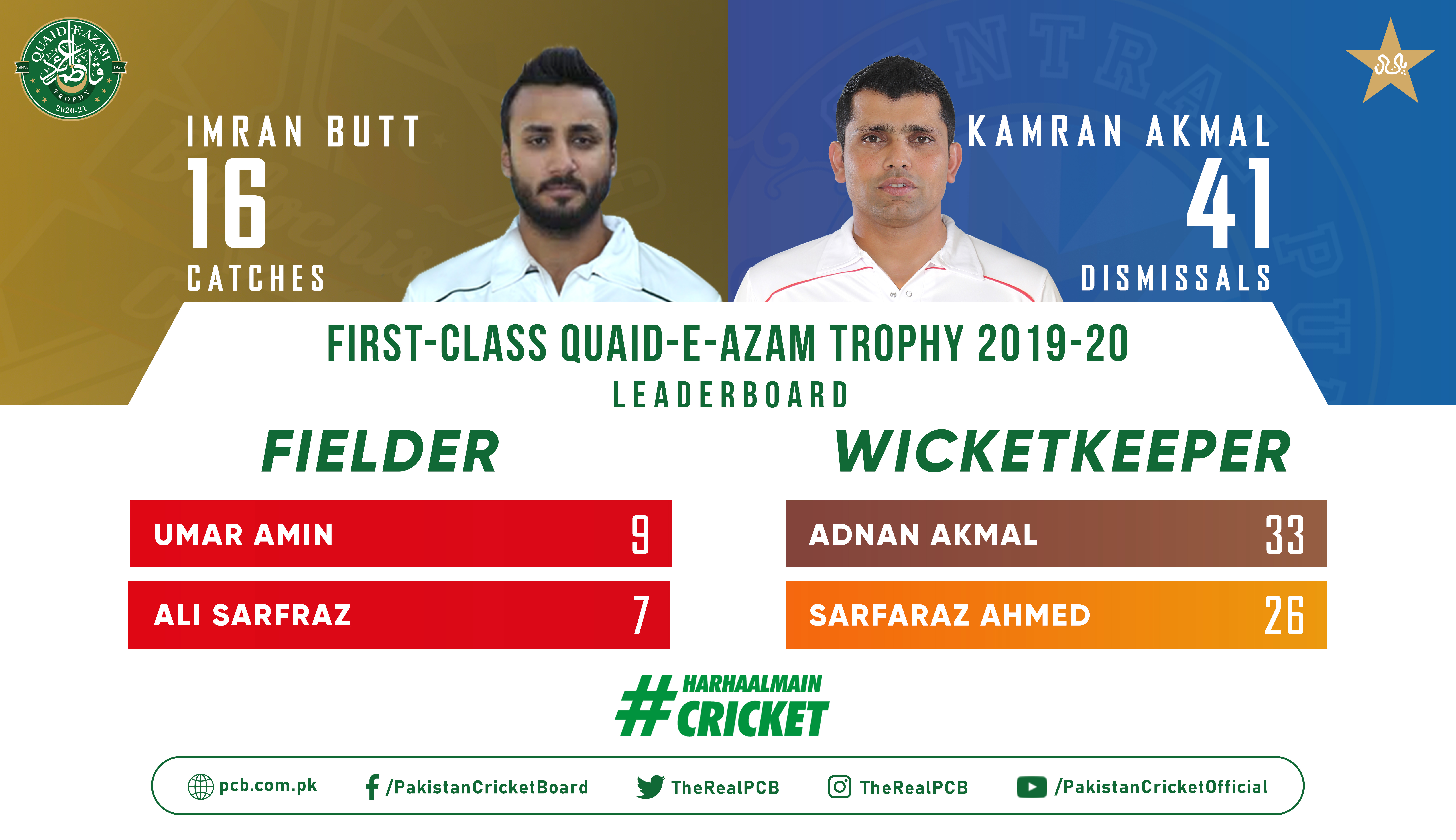