With merely hours to go before that titanic struggle at the Cricket World Cup, my dear Pakistani friends I extend to you a laurel wreath of peace and fellowship that has been lightly dusted with Anthrax spores.

Today I write to you with a mutually beneficial proposition. Namely:

“I would like your team to lose the match against India.”

Kindly ask your chaps to bowl as poorly as possible, bat with little to no urgency, and display nothing more than the usual levels of team spirit and unity.

But what is mutually beneficial about this ask? Why should we bring this civilisational shame upon us, you wonder?

Let me give you not one, not two, not seven, but five different reasons why losing this match to India is entirely beneficial for Pakistani cricket and the nation of Pakistan as a whole.

1. It will definitely improve your chances of winning the World Cup. Once your team has lost to India, this humiliation will motivate your boys to play even harder in the remaining matches. Not only that, now that the India match is behind them, they will play with free minds and without the burden of expectations or patriotic pressure or Misbah-ul-Haq, who will probably retire after the loss to India. So what would you rather have? A chance to lift the World Cup? Or the mundane, pointless satisfaction of beating India. The choice is clear. 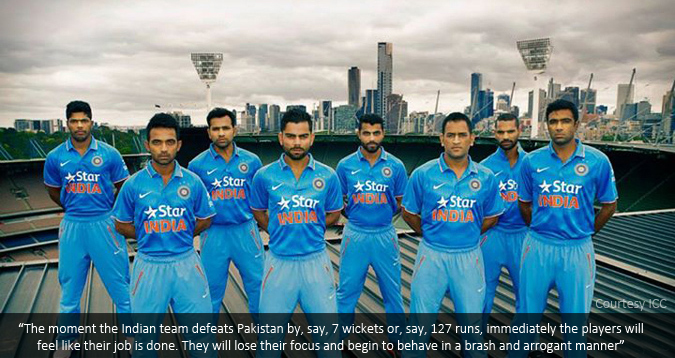 2. It will definitely reduce India’s chances of winning the World Cup. Think about it. The moment the Indian team defeats Pakistan by, say, 7 wickets or, say, 127 runs, immediately the players will feel like their job is done. They will lose their focus and begin to behave in a brash and arrogant manner. Maybe Virat Kohli will set fire to a bar in Sydney. Maybe Rohit Sharma will also try to set fire to a bar in Sydney and then fail despite the fact that he was exhibiting very high quality combustion in the nets. These distractions will cramp India’s form thus leaving open a direct route to World Cup glory for Pakistan.

3. Imagine for a moment that Pakistan comprehensively defeats India tomorrow. This could suddenly make the BCCI realise that it has to drastically overhaul Indian cricket. It decides to create better pace bowlers, invest in faster pitches and toughen our batsmen. By the next World Cup, India is the finest cricketing team in the world. Is that what Pakistan wants? The answer to that question is 25 words long and each of those words is “no” except the last one, which I cannot print here due to shame. Lose immediately. Lose comprehensively.

If you beat us, then the Indian economy will slump, pulling down global confidence and quite possibly pushing all of us into a new recession. Is that the kind of world we want to bring our children into?

4. Let us also not forget the economic impact. It is well known that success in sport will lead to a temporary boost in business confidence in a country. If India wins tomorrow, it will immediately create euphoria in India for the next few months. This will lead to increased consumer spending, business spending and boost the Indian economy and, by extension, the world economy. Which is also beneficial for Pakistan. On the other hand, if you beat us, then the Indian economy will slump, pulling down global confidence and quite possibly pushing all of us into a new recession. Is that the kind of world we want to bring our children into, Meesha Shafi? Never.

5. And finally, let us not forget that the last time Pakistan won the World Cup, in 1992, it did so only after India beat them comprehensively by 43 runs in Sydney. If Pakistani fans truly want to repeat their exploits of that tournament, then I think it is only safe to repeat that performance against India. Let us tempt fate again and see what happens.

Of course it is not easy for me to share these strategies with you. As a proud Indian, nothing hurts me more than doing anything to increase Pakistan’s chances of winning the World Cup. But under these circumstances, I think we should all be prepared to let India beat you by a significant margin in Adelaide. I think it would be best for both our countries.

Sidin Vadukut is an editor with the Mint business daily. He is the author of three books of fiction and The Sceptical Patriot, a series of investigations into Indian historical achievements. He is currently working on a thriller set in Mumbai
Twitter: @sidin