Lahore, 17 September 2019: The four-day first-class Quaid-e-Azam Trophy match between Central Punjab and Southern Punjab at the Gaddafi Stadium in Lahore ended in a draw.

Southern Punjab were 107 for one in their second innings with Sami Aslam and Umar Siddiq batting on 50 and 18, respectively, when the two captains shook hands.

Southern Punjab’s only wicket to fall, and the only batsman to be dismissed twice in this match, was their captain Shan Masood, who scored 32 runs before getting trapped LBW by Zafar Gohar.

Earlier in the day, Mohammad Saad and Faheem Ashraf resumed their innings at 30 and 41, respectively. The pair knitted an 80-run partnership in 116 balls. It was their stand that helped Central Punjab, which started the day at 348 for five, score 473 all-out in response to Southern Punjab’s 467 all-out.

Saad, the first-ever concussion replacement in the history of Pakistan’s first-class cricket, added 29 runs to his overnight score to finish with 70 off 208 balls with 11 fours.

With the Gaddafi Stadium’s pitch deteriorating, the remaining five Central Punjab wickets were picked by spinners. Southern Punjab spinners Mohammad Irfan, the slow left-arm orthodox, and Zahid Mahmood, the leg-spinner, took all of their wickets on Tuesday, returning four for 120 and one for 130 respectively.

Both teams bagged 11 points, five of which came from the draw.

Southern Punjab got five for scoring more than 400 runs inside 110 overs and Central Punjab got four for scoring between 350 and 400. Central Punjab, however, had the upper hand in the bonus bowling points as they were awarded two points for picking six wickets in 110 overs. Southern Punjab managed were given only one point for taking five wickets.

In the second round, which begins from 21 September, Central Punjab faces Northern in Faisalabad and Southern Punjab go to Quetta to play Balochistan. 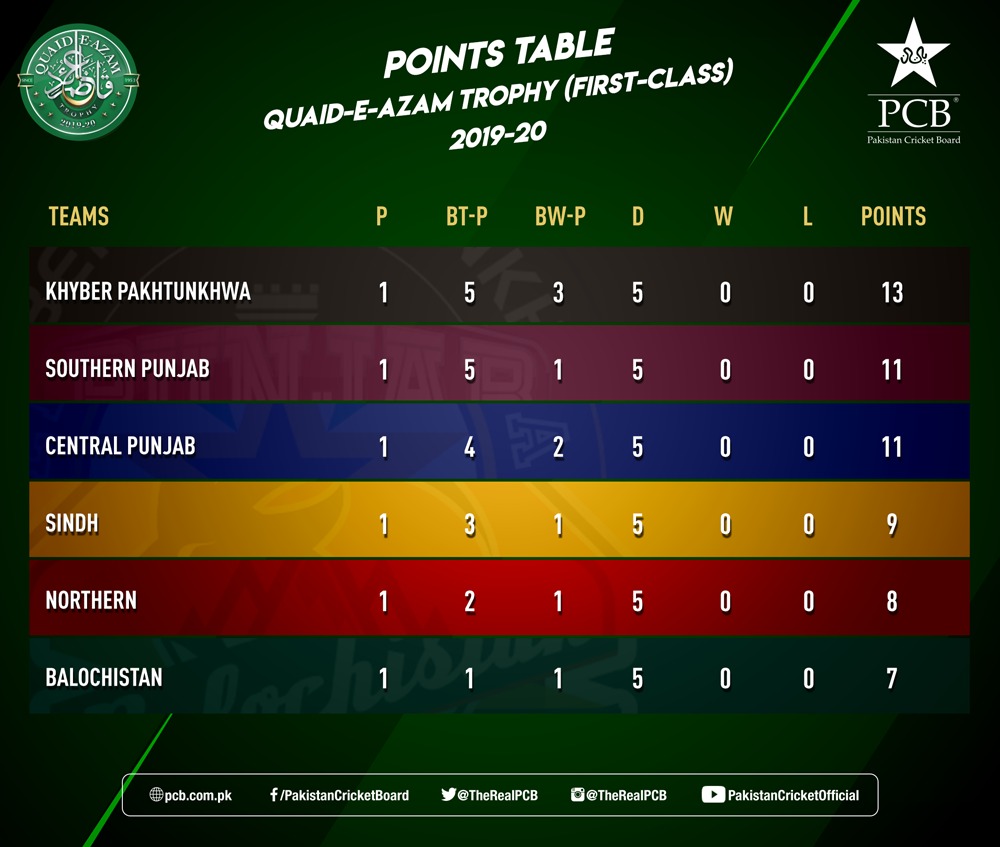