Lahore, 13 September 2019: The Pakistan Cricket Board (PCB), as part of its commitment to provide unprecedented coverage of the four-day first-class Quaid-e-Azam Trophy, has announced 10 of the 30 league matches will be live-streamed on the PCB Youtube Channel. The 9-13 December final at the National Stadium will be televised live by the PCB’s broadcast partner.

The six-camera coverage will commence with the Derby fixture between Central Punjab and Southern Punjab at the Gaddafi Stadium, which will give cricket fans an opportunity to connect with the tournament and follow the performances of their favourite cricketers.

Quetta’s Bugti Stadium, which will be hosting first-class matches for the first time since October 2008, features prominently in the list of venues that will show live cricket. Their fifth and sixth round fixtures at the Bugti Stadium will be live-streamed, giving the fans a chance to enjoy action from a picturesque venue.

The following are the matches that will be live-streamed:

Matches for live-streaming have been selected in a manner that provides equal coverage to all the six competing sides.

The following is the team-wise breakdown of live-stream coverage:

In addition to the Quaid-e-Azam Trophy matches and as part of the PCB’s resolve to highlight women’s cricket and deliver greater coverage of women’s cricket, the 26 September final of the National Triangular One-Day Women’s Cricket Championship will also be live-streamed from Lahore Gymkhana, Lahore. 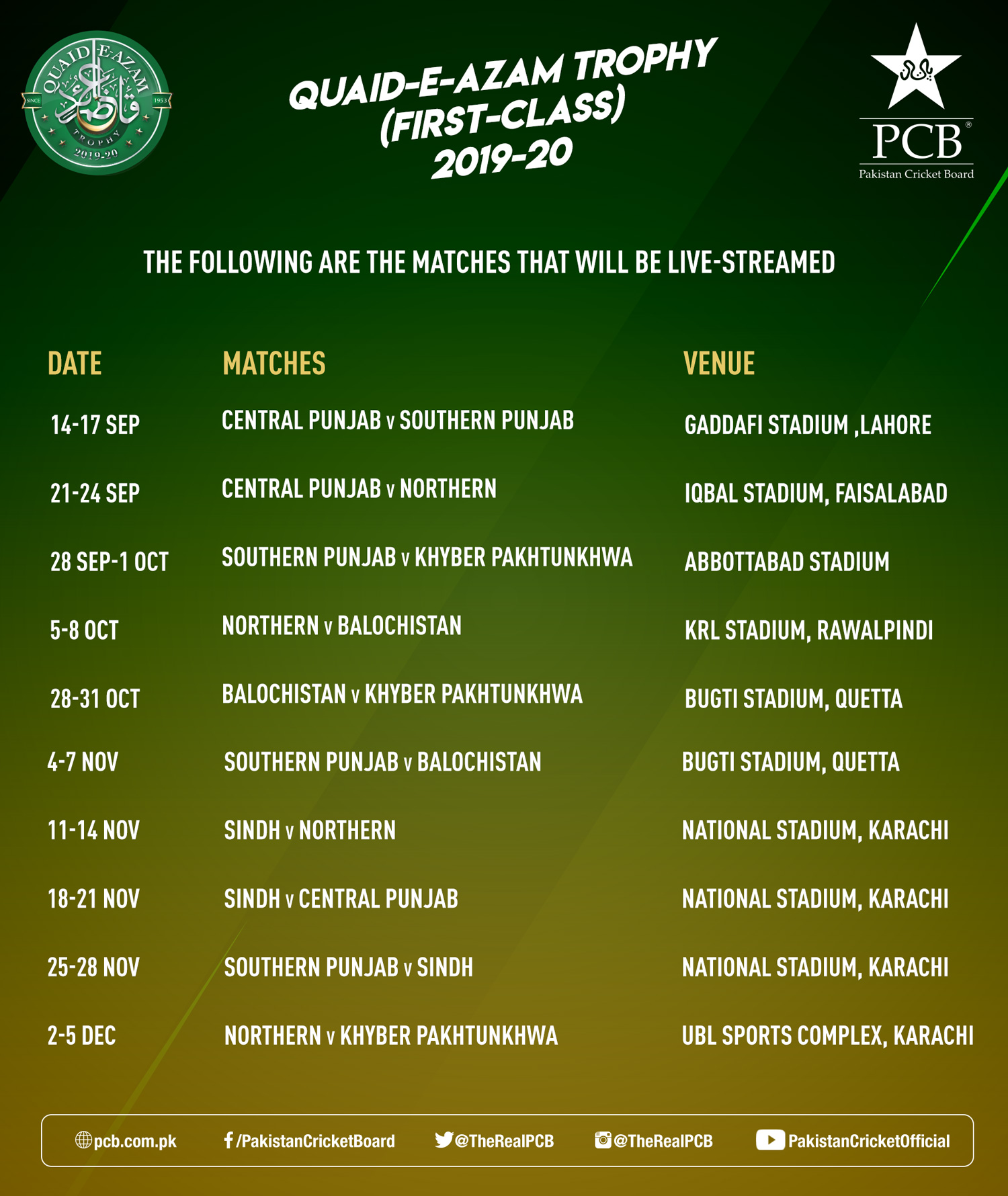 To ensure there is digital coverage from Quaid-e-Azam Trophy matches that will not be live-streamed, the PCB aims to release video highlight packages.

Other arrangements made by the PCB to enhance the profile of the event, provide extensive coverage to the high performing cricketers and allow the fans to follow the Quaid-e-Azam Trophy, include:

Scoring – There will be live-scoring for the Central Punjab and Southern Punjab match and will be available here. Hourly updates from the other two matches, which can be followed at @TheRealPCB_Live.

Hashtag: The fans can connect to the Quaid-e-Azam Trophy by using official hashtag #QeA19

Match reports – The PCB will provide match reports in English, while roundups will be provided in Urdu.

The entry of the fans at the three venues will be free. This initiative has been taken to allow the cricket followers to get closer to the action and see live in action Pakistan’s best cricketers battle out in its premier competition.

While there is one entrance to the Abbottabad Cricket Stadium and UBL Sports Complex, fans can enter the Gaddafi Stadium from Gate No.2.

All the three matches will start at 10am.