Lahore, 11 April 2021: The Board of Governors of the Pakistan Cricket Board met through a virtual conference call on Saturday. This was their 62nd meeting overall and second of the year.

Following are some of the matters that were discussed:

The BoG received a presentation and an update on the report of the two-person fact-finding panel that was set-up by the PCB Chairman to review the bio-security protocols, bylaws and arrangements for the HBL Pakistan Super League 6 and make recommendations on how to better ensure implementation of a bio-secure environment for future events.

The BoG discussed and debated the panel’s findings in detail. They expressed their disappointment at the failures that were highlighted in the report and advised remedial actions needed to be taken.

The BoG endorsed all recommendations of the fact-finding panel, including robust and stringent implementation of the protocols, as well as maintaining a zero-tolerance approach towards all those who breach the Covid-19 SOPs, which are put in place for safeguarding the health and safety of all participants.

The BoG was informed that as part of the strategy to ensure the HBL PSL 6 resumed and completed in a safe and secure environment, the PCB was in final stages of appointing a globally-recognised safety management company that specialises in providing Covid-safe technology solutions, bio-secure monitoring & management, as well as response and reaction to positive tests.

The members were informed that a mandatory seven-day quarantine period for all participants will commence from 22 May in one hotel and following three days of training sessions, HBL PSL 6 matches will resume on 1 June with the final scheduled for 20 June.

The following is the schedule of the 20 remaining matches, finalised in consultation with the franchises (all matches at National Stadium, Karachi; evening matches will start at 8pm; in case of double-headers, first match will begin at 5pm while the second match will start at 10pm): 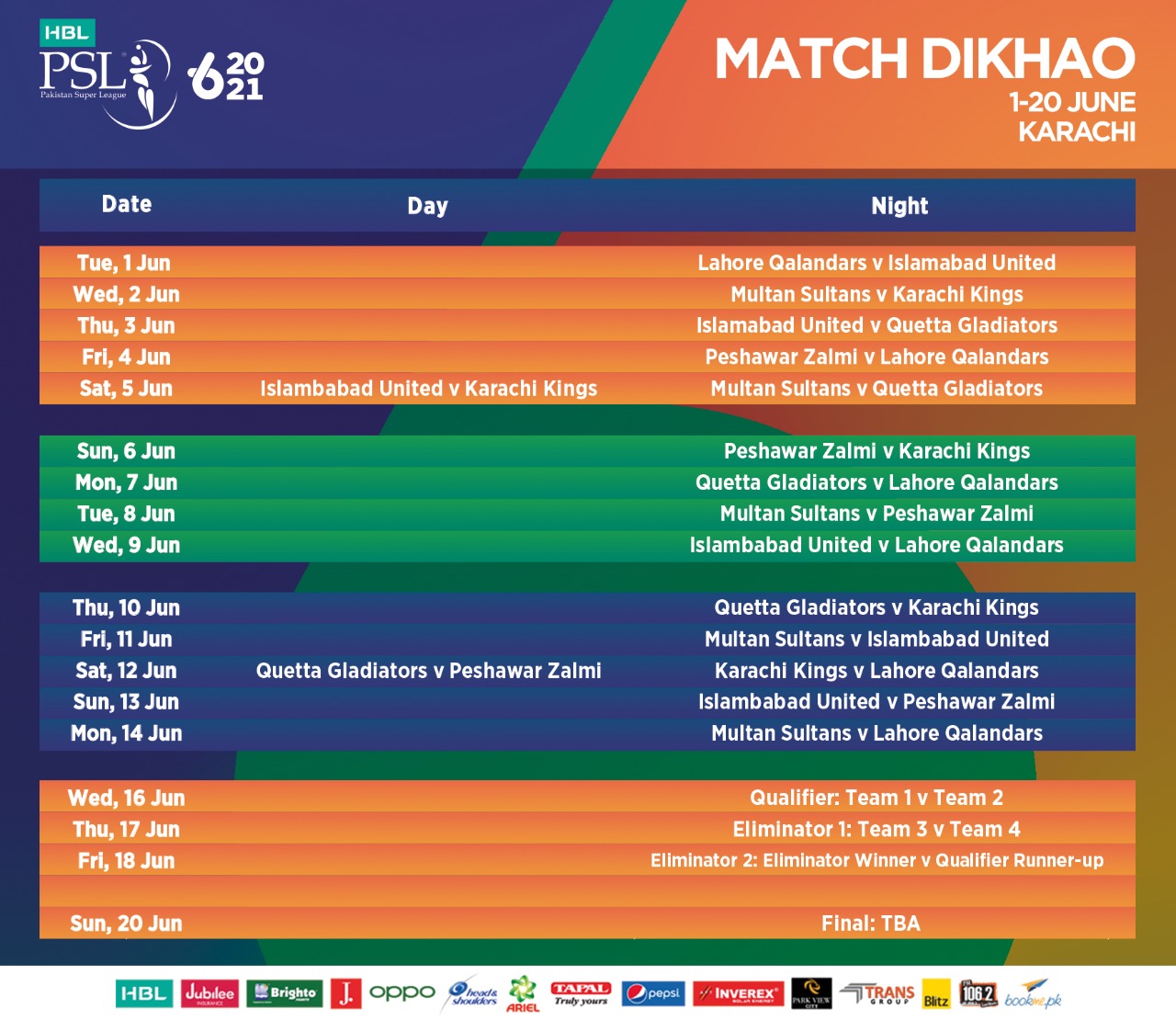 In an effort to further acknowledge and celebrate the achievements of Pakistan cricket stalwarts, the BoG unanimously supported and approved the launch of the PCB Hall of Fame.

Initially, six members from the ICC Cricket Hall of Fame will be inducted into the PCB Hall of Fame. There will be three more inductions each year from 2021 with the inductees to be chosen by an independent panel and announced on 16 October, day one of Pakistan’s inaugural Test in 1952. 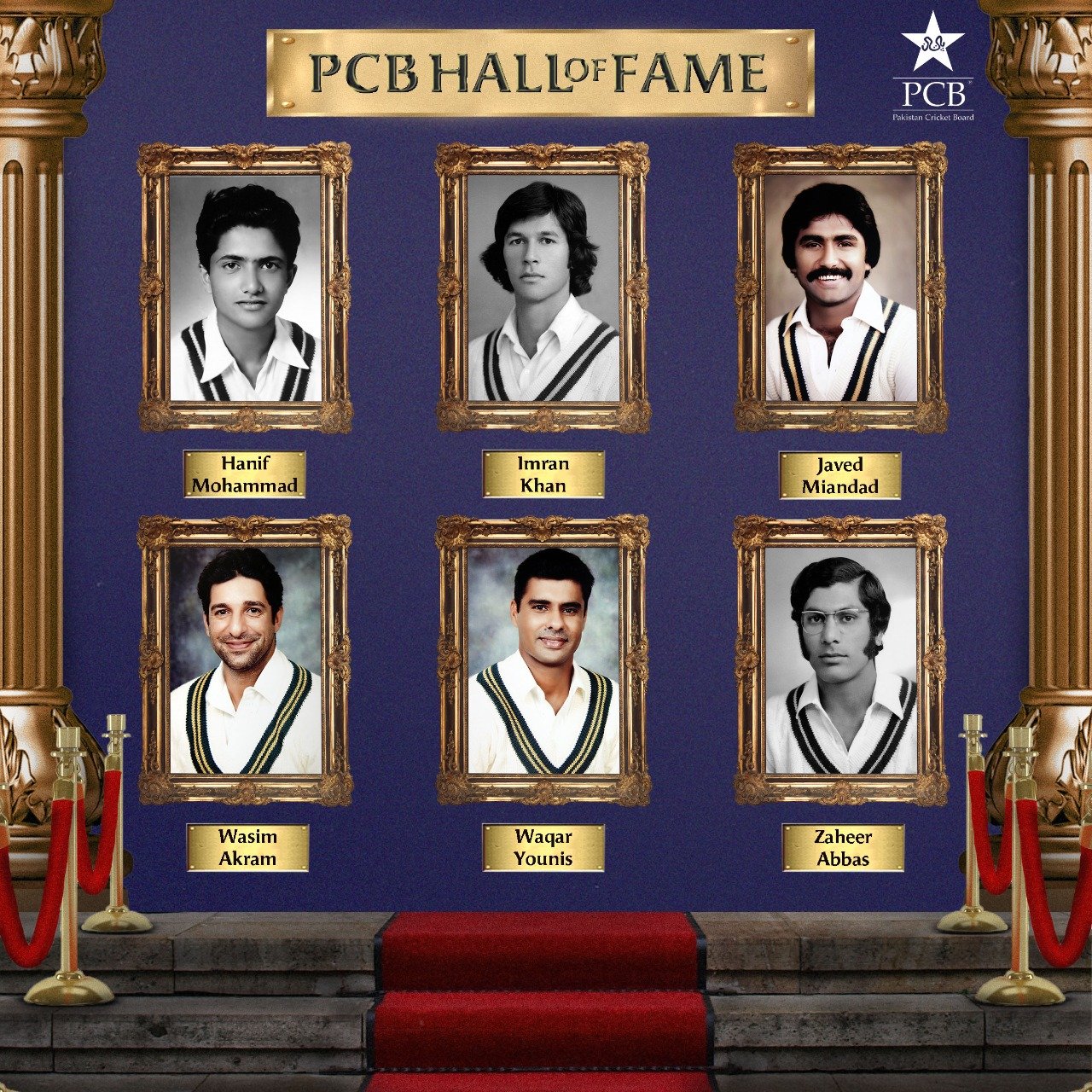 Players retired from international cricket for, at least, five years will be eligible for induction into the PCB Hall of Fame.

PCB Chairman Ehsan Mani: “Since earning the Test status, Pakistan has produced world-renowned cricketers who have not only put Pakistan on the world map but have left their mark on world cricket.

“There will be an initial intake of six ICC Cricket Hall of Famers - Hanif Mohammad, Imran Khan, Javed Miandad, Wasim Akram, Waqar Younis and Zaheer Abbas - who will be supplemented by three inductions in the PCB Hall of Fame each year starting from 16 October 2021. It is appropriate that these six extraordinary performers be the founding inductees as they continue to inspire the next generation of superstars.”

The BoG, in an effort to encourage, incentivise and recognise individuals supporting their clubs and following feedback from the relevant stakeholders, approved the following two amendments to the Model Constitution for Cricket Clubs:

The BoG was informed 3,807 applications were received, which was a 22 per cent increase on club registrations prior to the inception of the new domestic cricket structure in August 2019. The scrutiny phase and next opportunity for the clubs to register will be available later this year.

The BoG was also updated on the progress made in operationalising the six Cricket Associations. The PCB has now received applications for Cricket Association chief executives and shortlisted candidates will subsequently be interviewed later this month before formal appointments are made. After the chief executives have been appointed, the recruitment process for General Manager - Cricket Operations and Manager - Accounts will commence.

In the very near future, the PCB will be inviting applications for City Cricket Association head coaches, which will open up employment opportunities for, at least, 90 former cricketers.

The BoG congratulated the Pakistan men’s national and the blind cricket teams on their recent successes. The national side defeated South Africa by 2-1 to rise to second in the ICC Men’s Cricket World Cup Super League points table, while the blind team won the three-nation tournament in Dhaka last week.

The BoG also noted with satisfaction plans put in place to prepare sides for this year’s ICC Women’s Cricket World Cup Qualifier in New Zealand and next year’s ICC U19 Men’s Cricket World Cup in the West Indies. The Pakistan U19 camp concluded yesterday in Lahore following the postponement of Bangladesh tour due to the rise in Covid-19 cases, a couple of women’s international tours in the build up to the qualifiers are being discussed and finalised that will contribute further in the side’s preparations for the 10-team qualifier in New Zealand. The women’s side is presently in Karachi for a high performance camp.

PCB Chairman Ehsan Mani briefed the BoG on matters relating to the International Cricket Council as well as this year’s ICC T20 World Cup and the ACC Asia Cup, which has now been postponed to 2022.

The BoG was informed the PCB has taken administrative control of the LCCA ground following the completion of formalities, while finalisation of the lease agreement for the Pindi Cricket Stadium was still a work in progress due to the unavailability of the concerned departments and officers due to Covid-19 pandemic.

The next BoG meeting is expected to take place in June.