Lahore, 28 August 2020: The Pakistan Cricket Board today announced the six Cricket Association squads for the 2020-21 domestic cricket season, which will commence on 30 September with the National T20 Cup. First round of the event will be played in Multan, while the final round will be held in Rawalpindi. Complete season schedule will be announced in due course.

The squads were finalised by the six Cricket Association coaches who took into consideration performances of the last two seasons, retained maximum players from the 2019-20 season without reshuffling the squads too much and, where possible, provided opportunities to the centrally and emerging contracted players to represent their Cricket Associations.

This has been done to ensure sense of ownership and pride amongst the players representing their Cricket Associations, which, in turn, will further enhance the involvement of the fans and cricket followers, and provide more balance to the six sides to make the forthcoming season more competitive than 2019-20.

As such, the selectors have retained 158 players who were offered 2019-20 domestic contracts and have included 34 new players, including some who represented Pakistan in the ICC U19 Cricket World Cup 2020.

Each Cricket Association squad will comprise 45 players – 32 players with domestic contracts, supported by 13 additional players – and the PCB centrally and emerging contracted cricketers, belonging to their respective regions.

The coaches will finalise the playing lineups for the events proper (National T20 Cup, Quaid-e-Azam Trophy and Pakistan Cup One-day Tournament) in due course following discussions with captains and vice-captains, who will also be confirmed at that stage.

Players with the seasonal contracts will be eligible to receive match fee, daily allowances and other related benefits, wherever applicable.

The six head coaches have also finalised their squads with the vision of nurturing up and coming cricketers.

In this relation, 11 teenagers who participated in the ICC U19 Cricket World Cup earlier this year, have been selected.

The coaches, who are also members of the national selection committee, have also followed the PCB’s policy of investing in the future as average age of the Balochistan side is 27, followed by Central Punjab 26, Khyber Pakhtunkhwa 26, Northern 25, Sindh 25 and Southern Punjab 26.

Balochistan First XI Head Coach Faisal Iqbal: “The selection of the squads was based on a thorough assessment of the players based on a wide-ranging selection criterion. I want to thank the coaches of the Balochistan second XI and U19 teams along with the first XI assistant coach, who all played a vital role in the selection of this squad. I am confident the Balochistan squad will impress and prove to be a real competitive unit across the three formats. We have given opportunities to the local talent from the province and the performers have been given their due. The squad is well-balanced and full of exciting players.” 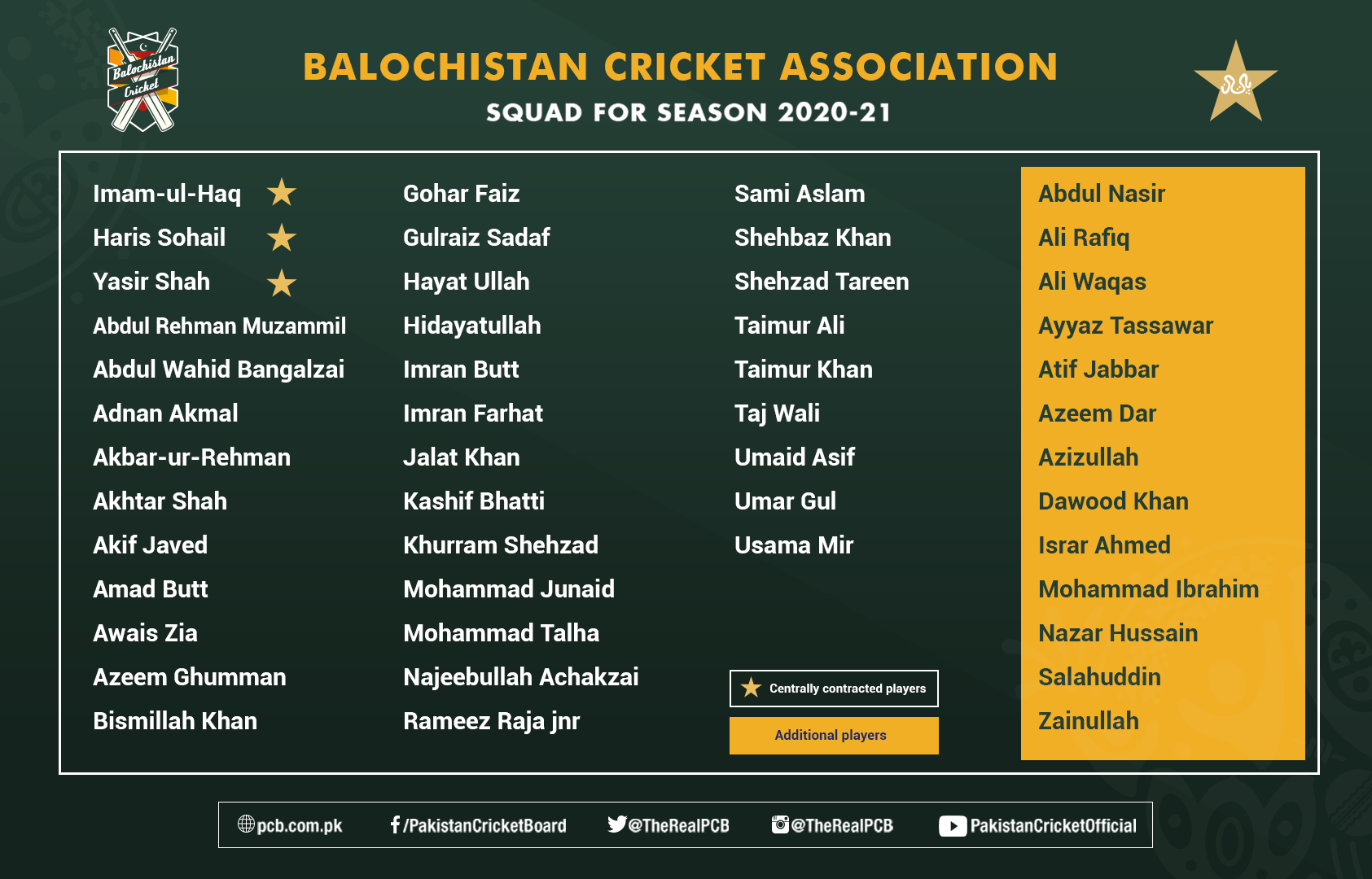 Central Punjab First XI Head Coach Shahid Anwar: “We have a big talent pool and some of the biggest names of the domestic game are once again part of the side which has established a legacy by the triumph in last year’s Quaid-e-Azam Trophy first-class tournament. This year we have picked some exciting players including Pakistan U19 performers, who will be groomed with an eye for the future.” 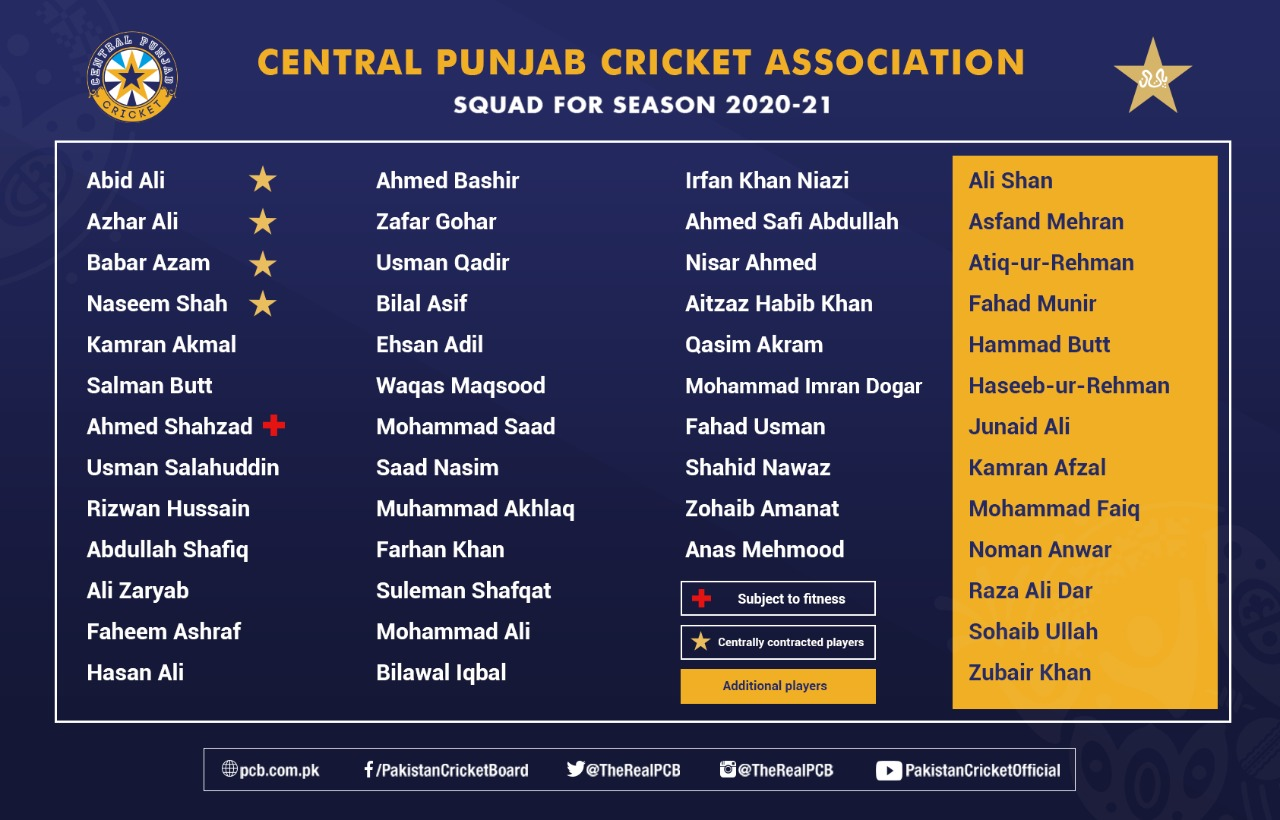 Khyber Pakhtunkhwa First XI Head Coach Abdul Razzaq: “I am fully satisfied with the selection process, which was made on the basis of a comprehensive and an all-encompassing selection criteria. My squad has a great blend of youth and experience and my aim would be to provide them all the support and encouragement they need to play to their best potential. Like the rest of the squads, I also have some exciting players who can be real assets for Pakistan cricket in due course.” 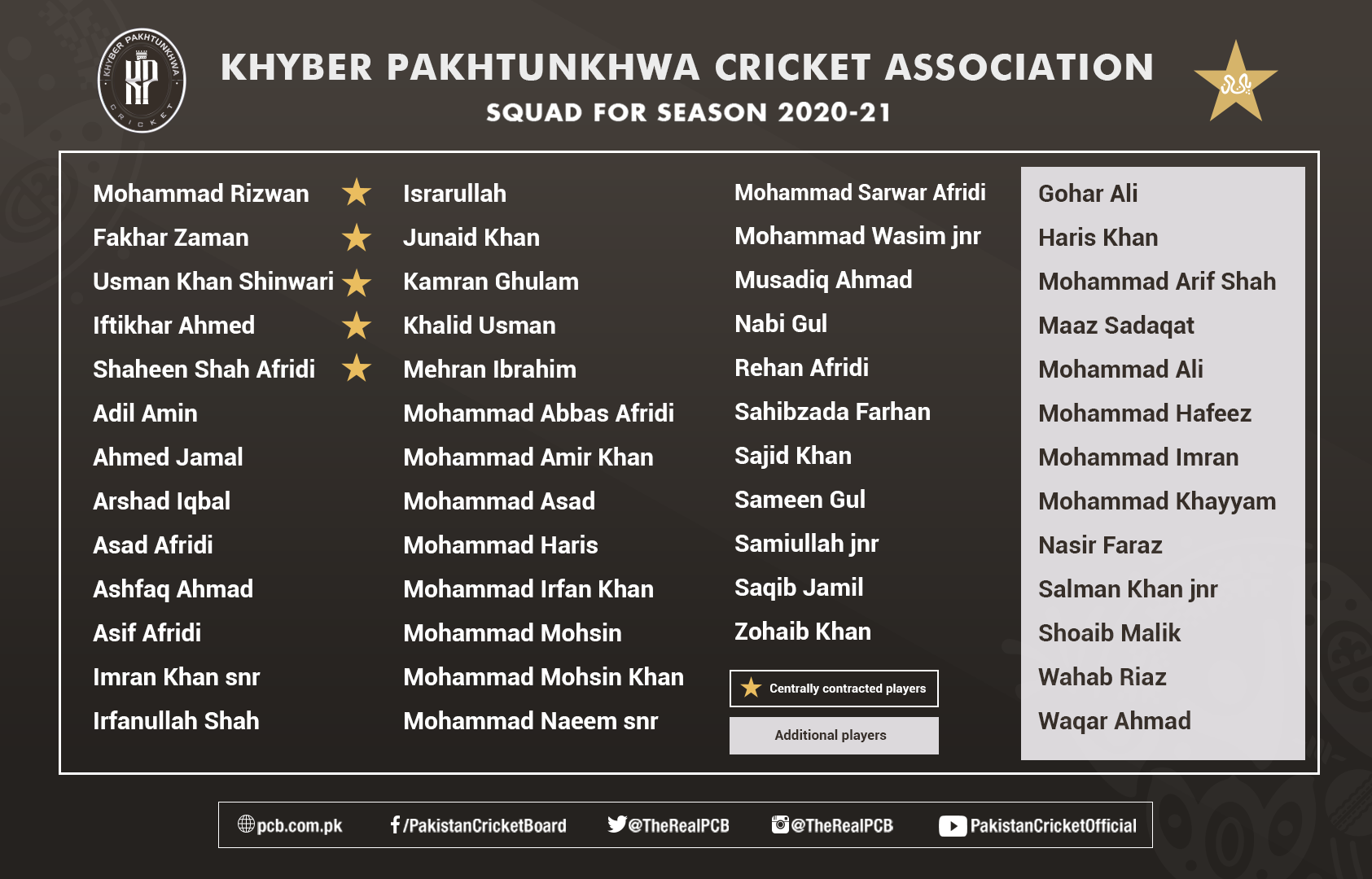 Northern First XI Head Coach Mohammad Wasim: “Northern played some exhilarating cricket last season and we made some innovative plans that brought us success in both the shortest and longest format. I have retained the core of the players who served the squad well and have added young blood with an aim of developing more top quality players who can not only serve us but can also graduate to the highest level of the game.” 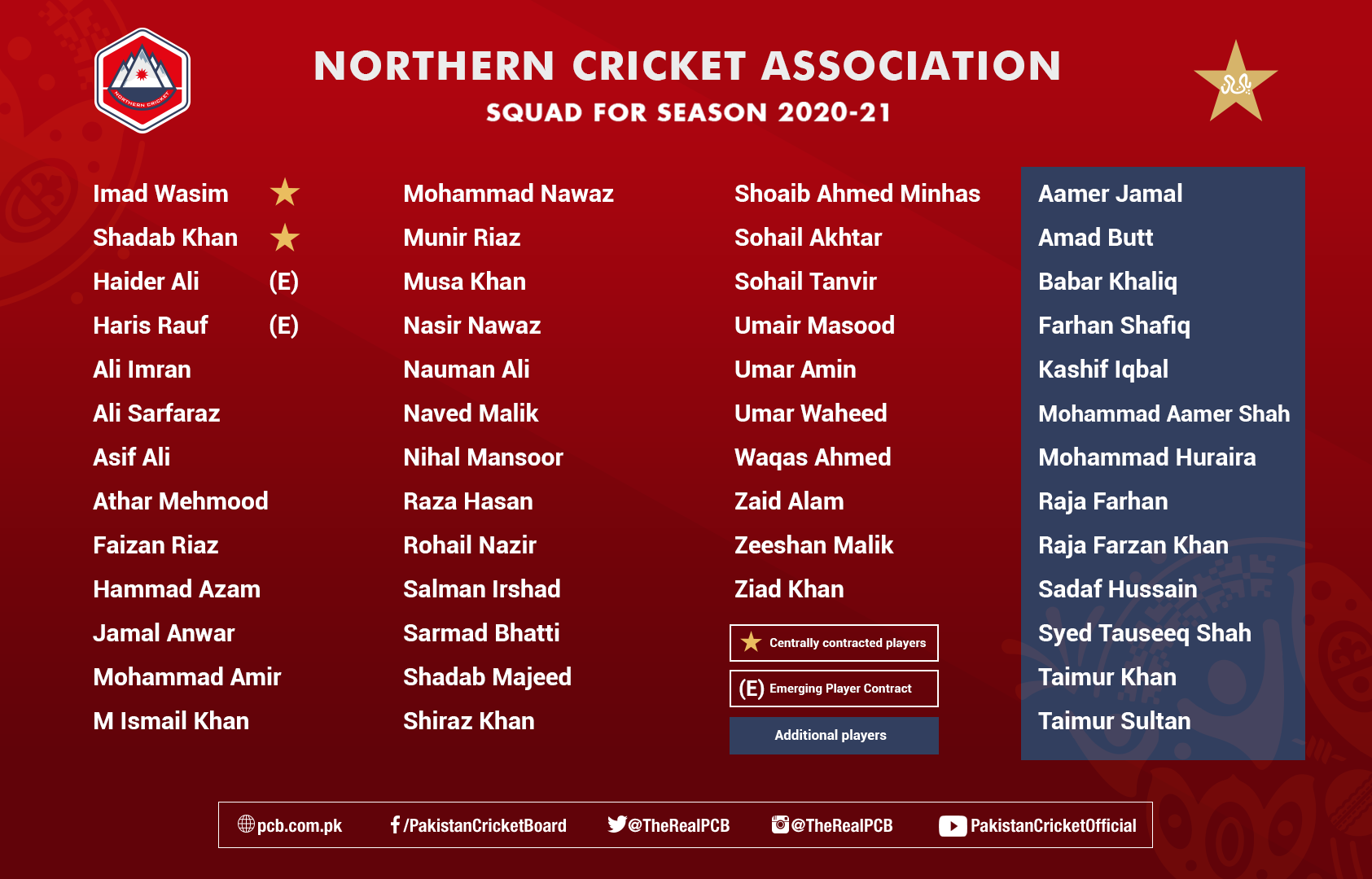 Sindh First XI Head Coach Basit Ali: “Sindh squad is a well-rounded one with some of the biggest names of the province, proven domestic performers as well as young players that have an abundance of potential. I look forward to a hugely exciting and competitive domestic season where both our red-ball and white-ball squads can play the kind of cricket that is on modern lines and in sync with the approach of the Pakistan team management.” 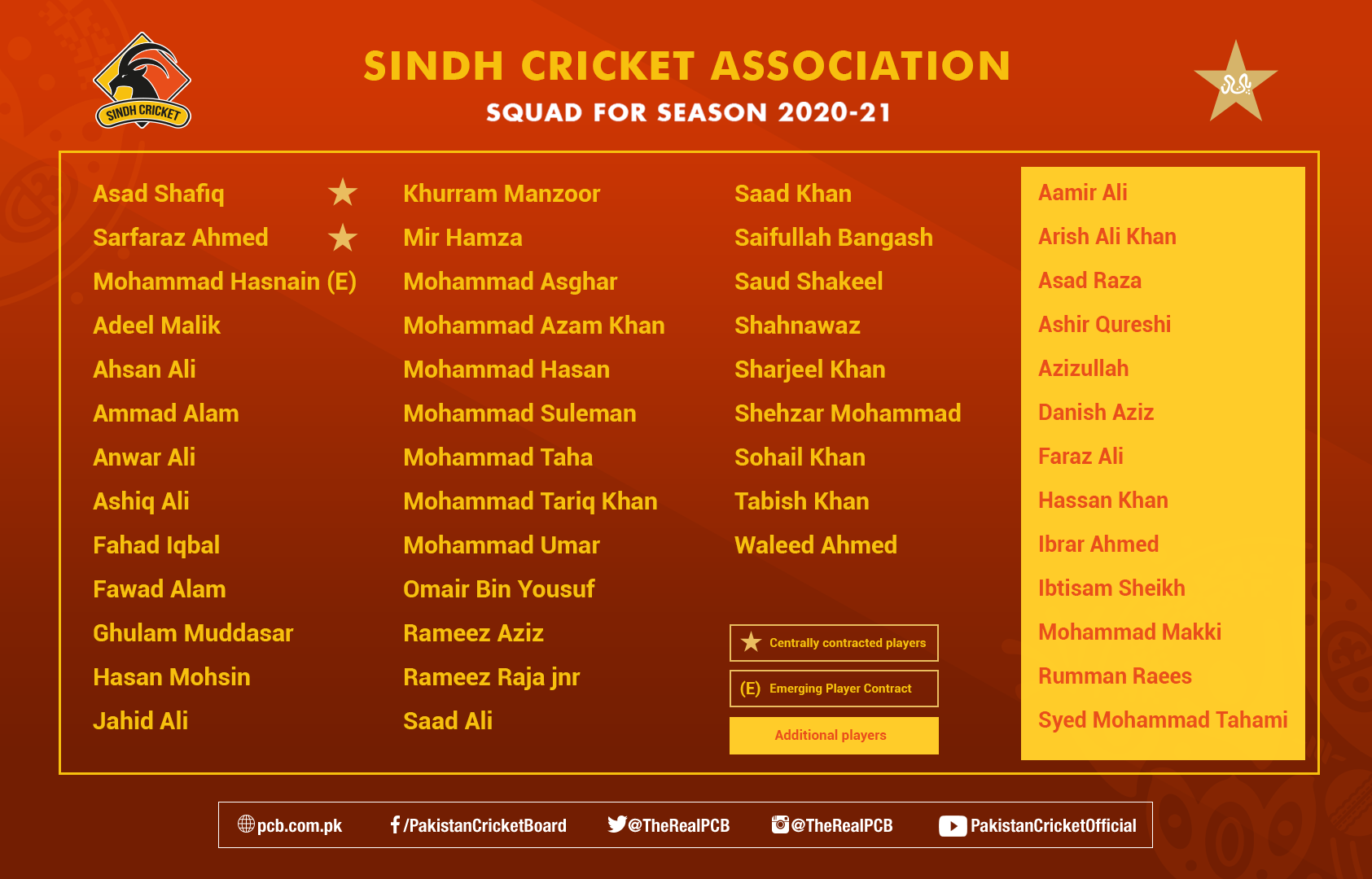 Southern Punjab First XI Head Coach Abdul Rehman: “I have focused on building a squad that is full of young and exciting players backed by experienced and proven performers of the domestic arena. My aim is to groom players who can serve Pakistan cricket across formats at the senior level. I feel my squad has the depth and quality to play an attractive brand of cricket with an eye both on success and development of players.” 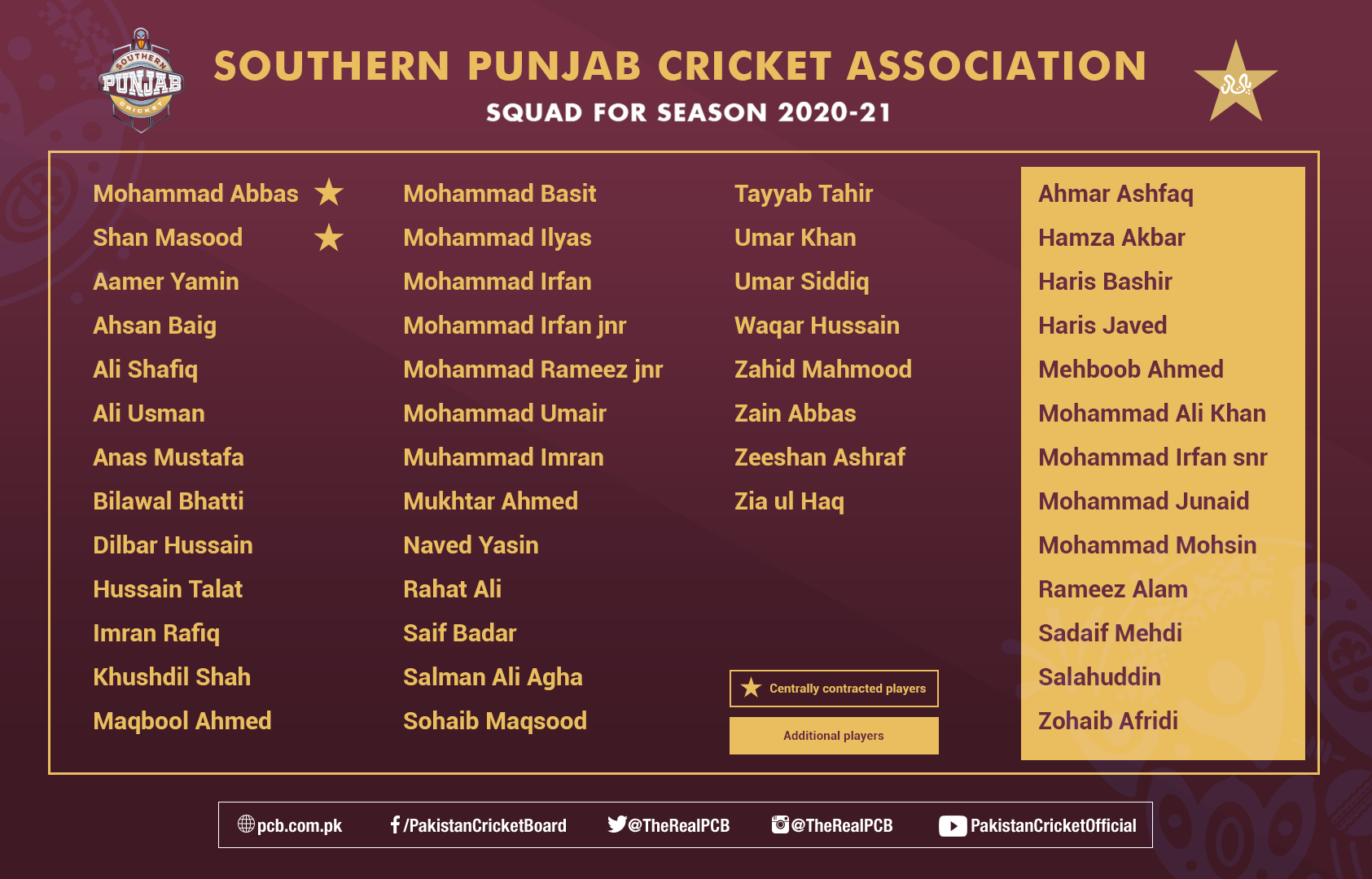