Lahore, 18 September 2019: The interest and convenience of families and general public was the focus for the Pakistan Cricket Board (PCB) which today announced ticket prices for the upcoming ODI and T20I series between Pakistan and Sri Lanka, starting on 27 September­.

The online sale of tickets will commence from 20 September and cricket fans can buy these online from www.yayvo.com, while select outlets of TCS (list attached) will commence sales a day later, on 21 September. 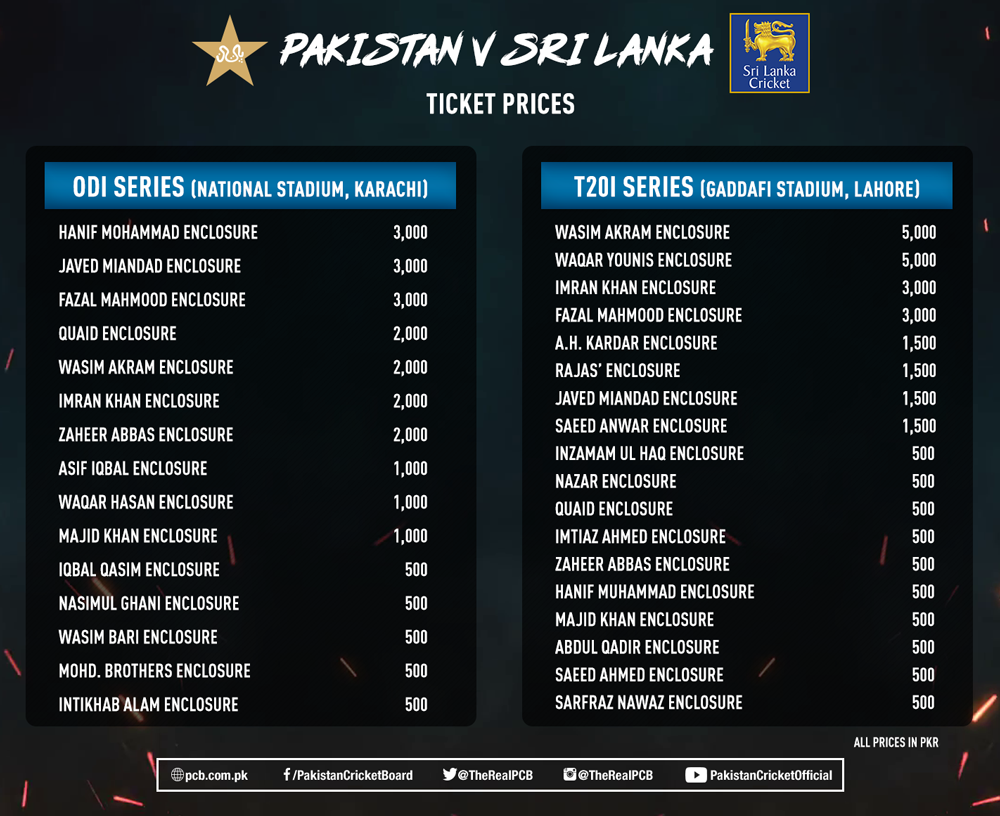 Tickets for Iqbal Qasim, Nasimul Ghani, Wasim Bari, Mohammad Brothers and Intikhab Alam Enclosures have been retained at PKR500; prices for Asif Iqbal, Waqar Hasan and Majid Khan Enclosures have been kept at PKR1,000; Quaid, Wasim Akram, Imran Khan and Zaheer Abbas are valued at PKR2,000; while tickets for Hanif Mohammad, Javed Miandad and Fazal Mahmood Enclosures will be available at PKR3,000.

Similarly, the PCB has set affordable ticket prices for the Lahore T20Is, which will be played on 5, 7 and 9 October. These are:

As per past practice, a fan will be able to purchase up to a maximum of 5 tickets on his / her CNIC, while the PCB, in collaboration with its partner, has used a ticket print material and technology that cannot be replicated or reproduced, thus, guaranteeing all valid ticket-holders will access to the enclosures of their choice.

PCB Director – Commercial, Babar Hamid said: “The interest of the fans has always been paramount to the PCB which is reflecting in the denominations of the ticket prices for the Pakistan versus Sri Lanka series.

“The ticket prices are affordable and will ensure the fans have fun on match days as the PCB is also working hard to improve the instadia ambiance that will add to the excitement.

“The PCB encourages all the fans and families to attend the matches in big numbers to not only back and support the teams but to also show the world, like we did during HBL PSL 2019, that we are peace and sport loving nation, and always support healthy activity.

“We saw the fans following and support during the first round of Quaid-e-Azam Trophy matches and we expect they will carry this into international cricket.”

TCS’s Country Head Consumer, Syed Shauket Abbas said: “As a Pakistani company itself, TCS considers it its privilege to play a part in the return of international cricket to Pakistan. We are confident that for the upcoming Sri Lanka series as well, we will provide a smooth experience to the cricket enthusiasts planning to buy tickets from TCS’ online and walk-in platforms. We are also looking forward to facilitate the PCB and spectators' in stadium gate management through seamless ticket validation”.

Further details on parking etc will be announced through our usual channels in due course.