Karachi, 24 September 2022: In line with its strategy and vision of incentivising high-performing domestic cricketers, encouraging them to embrace the game as a full-time professional sport and adding value to the local competitions, the Pakistan Cricket Board today announced details of the 2022-23 domestic contracts, which were approved by the Board of Governor (BoG) at its 70th meeting on Saturday. The contracts will run from September 2022 to August 2023 and the list of player names will be revealed in due course.

After Mr Ramiz Raja had announced an increase of PKR100,000 in retainers across all five categories upon being elected as the 34th PCB Chairman last September, the cricket board has again topped up the domestic retainers.

However, the biggest improvement is in the match fees, which have been increased with the objective of attracting star cricketers and inspiring them to maintain high standards so that they can continue to stay in the domestic contract categories. 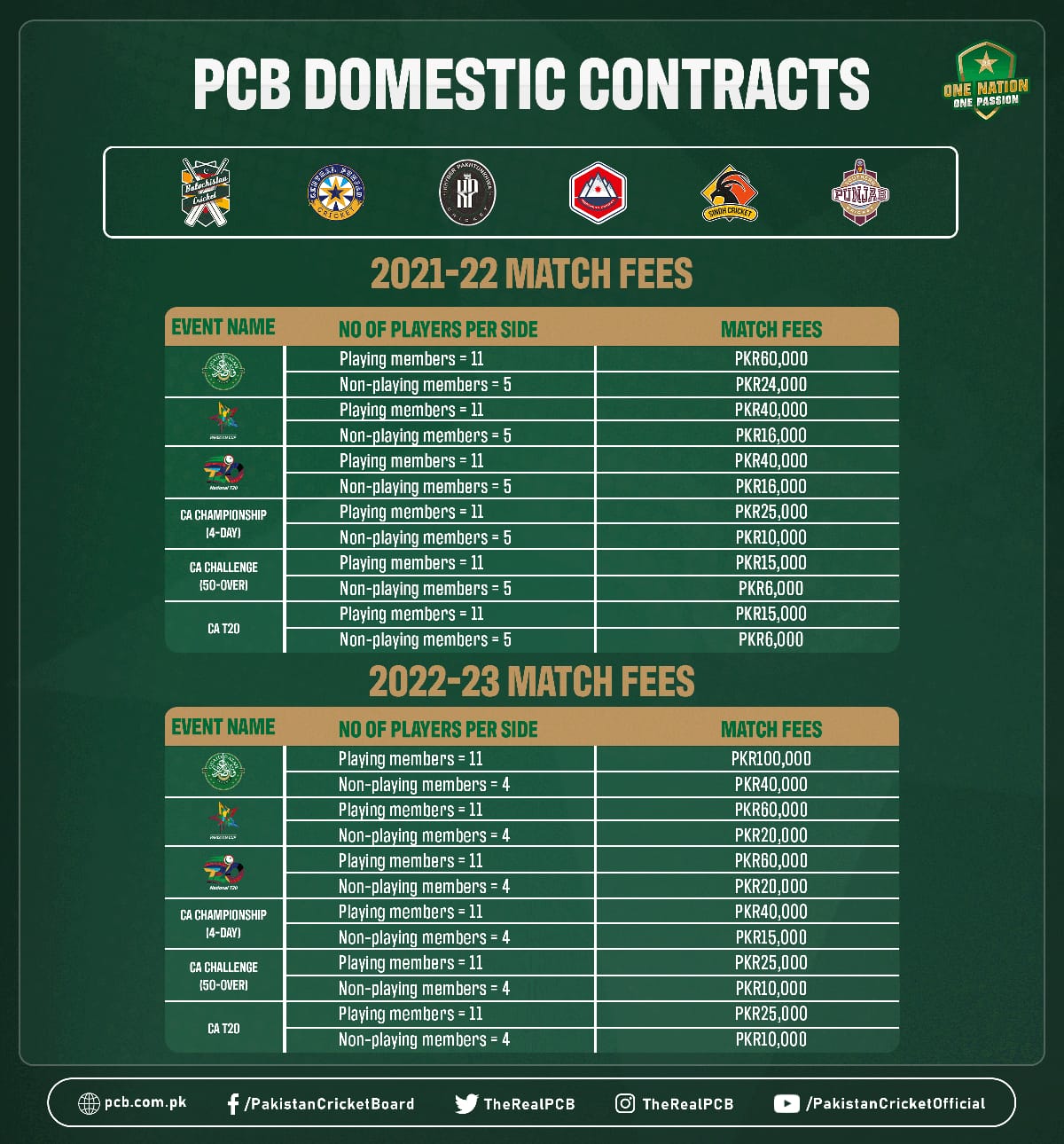 The overall impact following these latest increases in retainers and match fees is that Category A+ and Category D players can now potentially earn between PKR4.3million and PKR6.1million respectively. However, to make these earnings, the players will have to maintain the expected fitness levels and perform consistently so that they can feature in all league matches of the National T20, Quaid-e-Azam Trophy and Pakistan Cup. 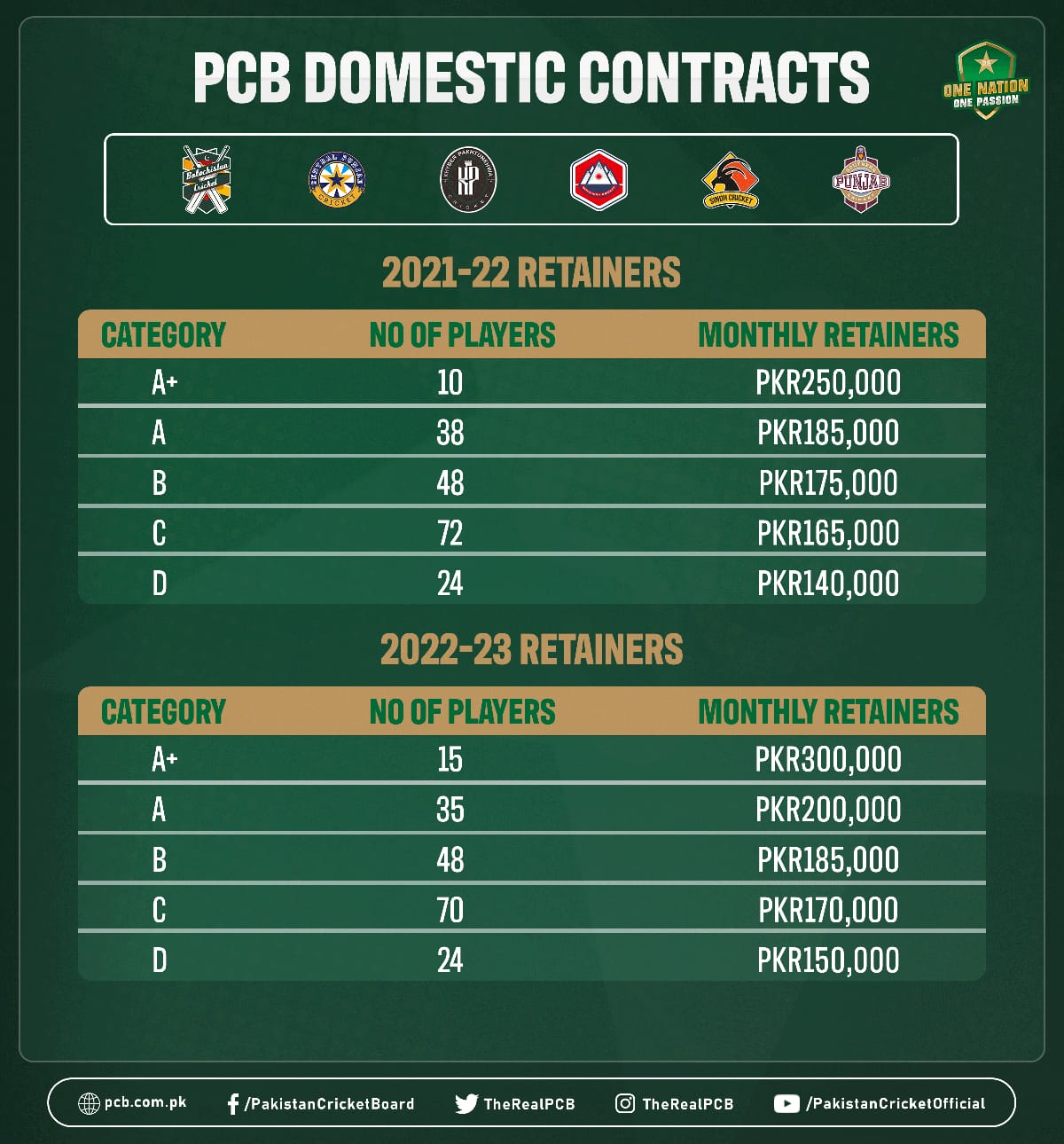 These are projected numbers and have been calculated on the basis of 30 league matches being played across the three major PCB events and without adding the impact of any prize moneys. The total prize money of the Quaid-e-Azam Trophy is PKR17million with the winner receiving PKR10million, the champion of Pakistan Cup will earn PKR5million from a total purse of PKR9.3million and the winner of the National T20 will get richer by PKR5million from a total pool of PKR8.7million.

Similarly, players participating in the second division CA Championship (four-day non-first-class), CA Challenge (50-over) and CA T20 will have an opportunity to earn around PKR1.14million through match fees and daily allowance payments. When the players’ monthly retainers are added to these numbers, then it again becomes a substantial figure and should motivate them further to not only do better but also aspire to play in the three major events, which will not only enhance their earnings but also bring them one step closer selections in the national side.

PCB Director - High Performance, Nadeem Khan: “Domestic cricket is the backbone of Pakistan cricket and we need to continue to invest in it to make it a stronger and more attractive brand. In this relation, I am grateful to the BoG for supporting and approving the management’s recommendations.

“Already, the standard and quality of our domestic cricket, as acknowledged by our elite cricketers, has become challenging and competitive. This is following merit-based selections, quality playing facilities, excellent logistical arrangements, high-quality broadcast and extensive digital media coverage. I am sure these new financial incentives will take our domestic cricket forward and assist the PCB in further reducing the gap with international cricket.

“The retainers and match fees have been increased to motivate and inspire cricketers to work harder round-the-year to maintain the required and expected levels of fitness and form, which forms the basis of retaining places in the contract list. Besides, the new incentives will also encourage them to give preference to our tournament over foreign leagues. Needless to remind everyone, PCB domestic events are a pathway to selection in the national side.”

2022-23 domestic contract categories (player names to be announced in due course): 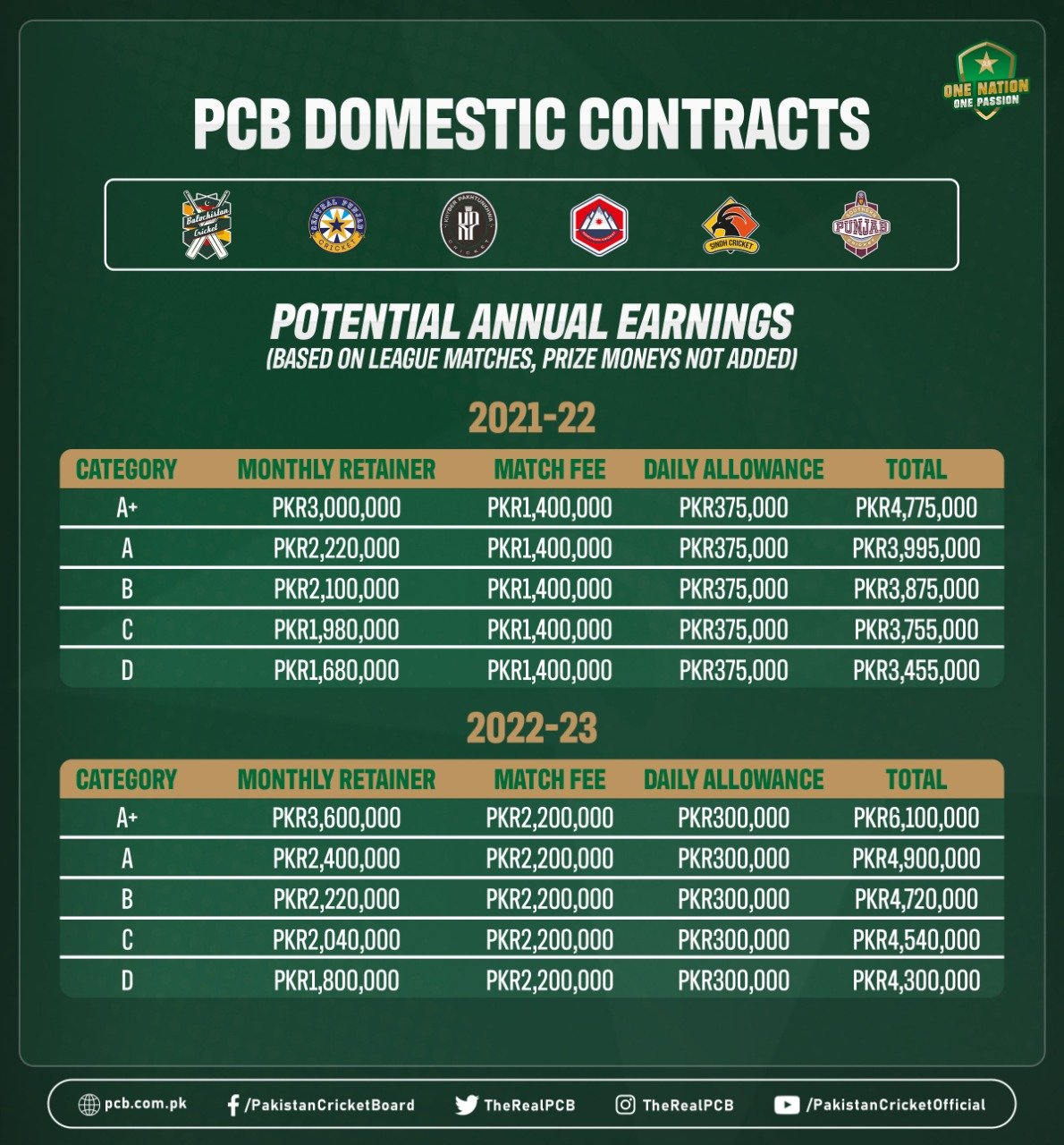