Each Cricket Association squad comprises 40 players – 32 of which will be awarded domestic contracts, to be announced in due course – along with 10 additional players. Every Cricket Association will name 16 players ahead of the First XI and Second XI tournaments, and these players can be transferred between the two teams.

The selected players are:

This move is in line with the PCB’s policy of incentivising and rewarding top performers at each rung of domestic cricket and setting a clear pathway for graduation to the next level.

The head coaches of the six Cricket Associations, who served as lead selectors of their sides, retained the core players, following which the remaining players were sent to a selection pool from where they were picked by other teams.

Balochistan’s squad includes 55 per cent local players, which is a jump by 10 per cent from the last season as the PCB continues its efforts to develop the game in the province and provide opportunities to the youth to establish their careers as cricketers.

In line with the promotion of the sport in the province, the PCB will commence the 2021-22 season from Quetta’s picturesque Bugti Stadium with the Cricket Associations T20 tournament starting on 15 September.

The six squads will gather at the major centres in their jurisdictions for the pre-season camp from Sunday.

Balochistan will have their camp at Quetta’s Bugti Stadium, Central Punjab’s will be conducted at LCCA Ground, Lahore, Khyber Pakhtunkhwa’s at Abbottabad Cricket Stadium, Northern’s at House of Northern, Islamabad, Sindh’s at National Stadium, Karachi and Southern Punjab’s at Multan Cricket Stadium.

Balochistan head coach Faisal Iqbal: “The CCA tournament provided a great opportunity to me to watch the upcoming cricketers of Balochistan and it helped me in further increasing the percentage of players in the squad. Last year, we had 45 per cent local players, which has now gone up to 55 per cent, which is a great sign for Balochistan cricket. Many of these top performers will be getting opportunities in the Second XI side, so when they reach the First XI team, they are well-prepared for the challenge, and can progress to Pakistan team.” 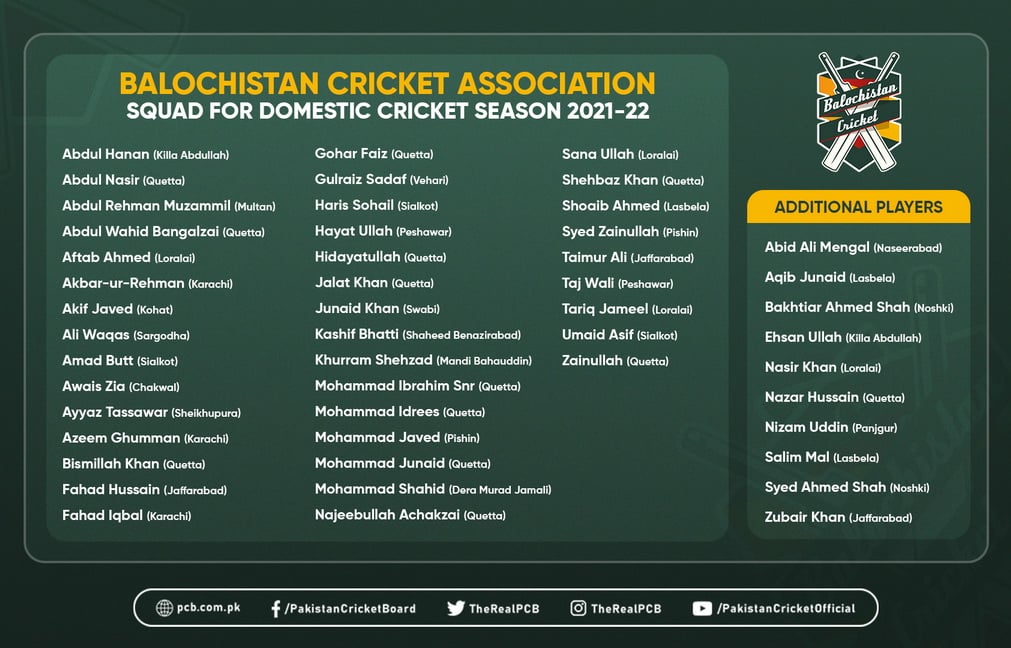 Central Punjab head coach Abdul Razzaq: “It will be an exciting challenge to coach Central Punjab after spending last year at Khyber Pakhtunkhwa. It was a great move to organise a camp of the top performers of the CCA tournament as it provided a fair and equal chance to all performers to display their skills and potential in front of coaches and it helped me in selecting promising players. I am confident that we have selected a squad that can outperform other sides in the season and I am eager to work on the skills of these players who can serve Pakistan in the future.” 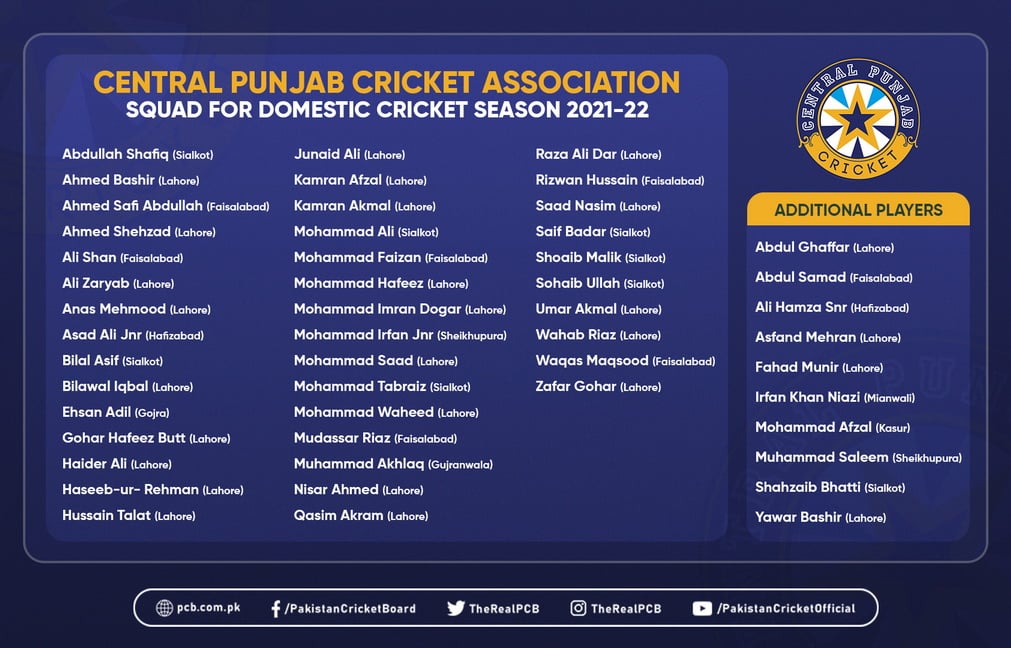 Khyber Pakhtunkhwa coach Abdur Rehman: “I have worked at Khyber Pakhtunkhwa for 10 years and I am very excited to be returning to the players with whom I had been working after spending two years at Southern Punjab. Khyber Pakhtunkhwa has maintained high standard of cricket throughout the last season as they won every First XI tournament. The region has produced exciting cricketers recently, and my philosophy of coaching here would be to enhance the skills of the youngsters and provide them opportunities so they can be fruitful for Pakistan cricket.” 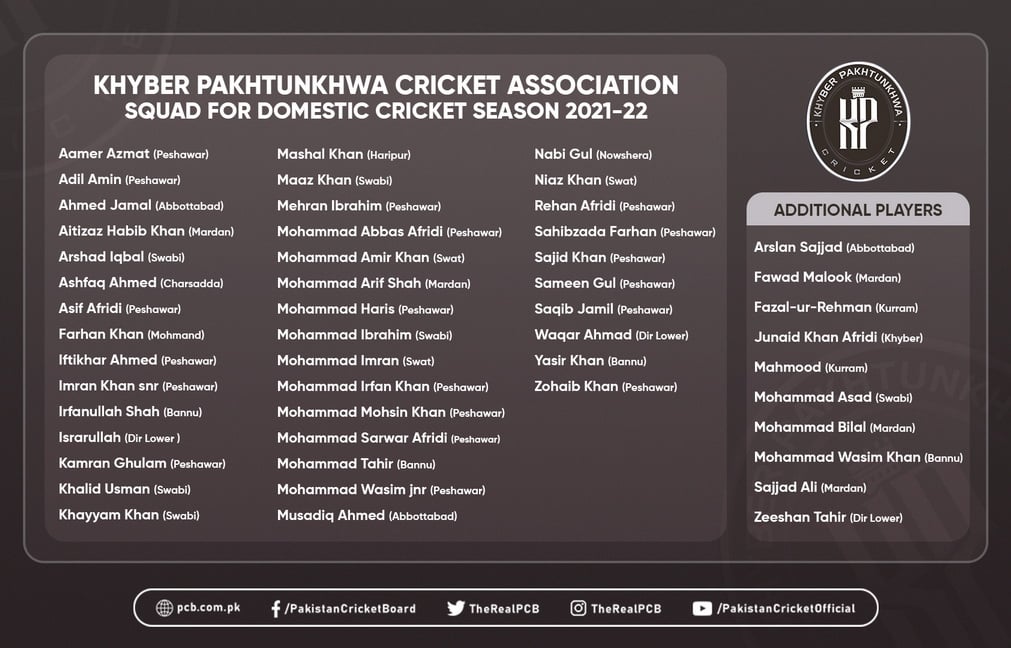 Northern head coach Ijaz Ahmed Jnr: “Northern is rich of cricketing talent and it has produced some wonderful cricketers over the years. I am delighted to be coaching them for the upcoming season. We have been able to put together a well-balanced side for the upcoming season by keeping both red and white ball specialist players in the side. The camp of the CCA performers helped us in identification of young players in the region and it played a crucial role in helping me in having a close look at the upcoming cricketers, some of whom are selected for the 2021-22 season.” 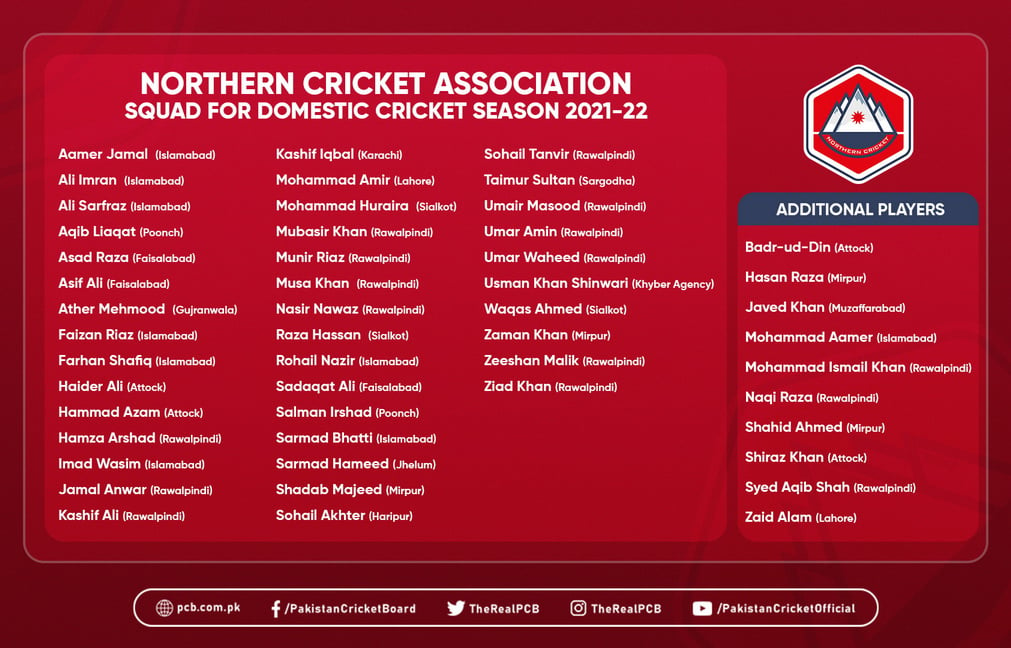 Sindh head coach Basit Ali: “The thought-process while putting together this squad was to fill in the gaps from the last season. We have strengthened our fast bowling and spin bowling departments as we have brought on board Zahid Mahmood and picked up young fast bowlers from the pre-training camp of the CCA top performers. My focus was to build a side which can turn around our red ball fortunes as we finished last in the last year’s first-class Quaid-e-Azam Trophy.” 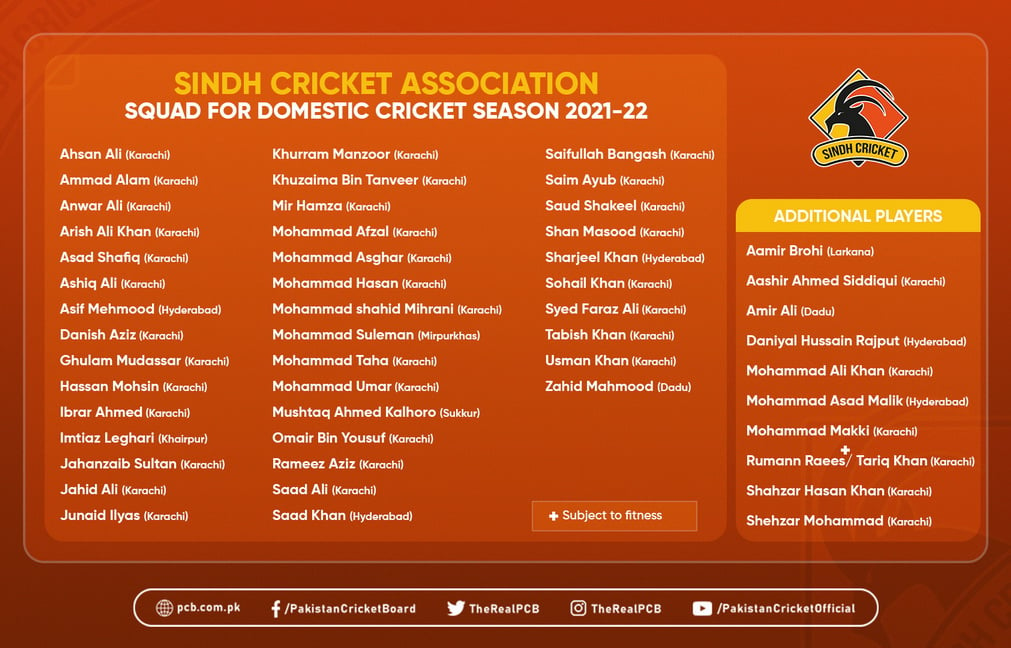 Southern Punjab head coach Shahid Anwar: “It is another great challenge of my coaching career to move to Southern Punjab. The Southern Punjab region is full of rich talent. We have developed squad keeping in mind that we have to build teams with the right combination of youth and experienced cricketers.” 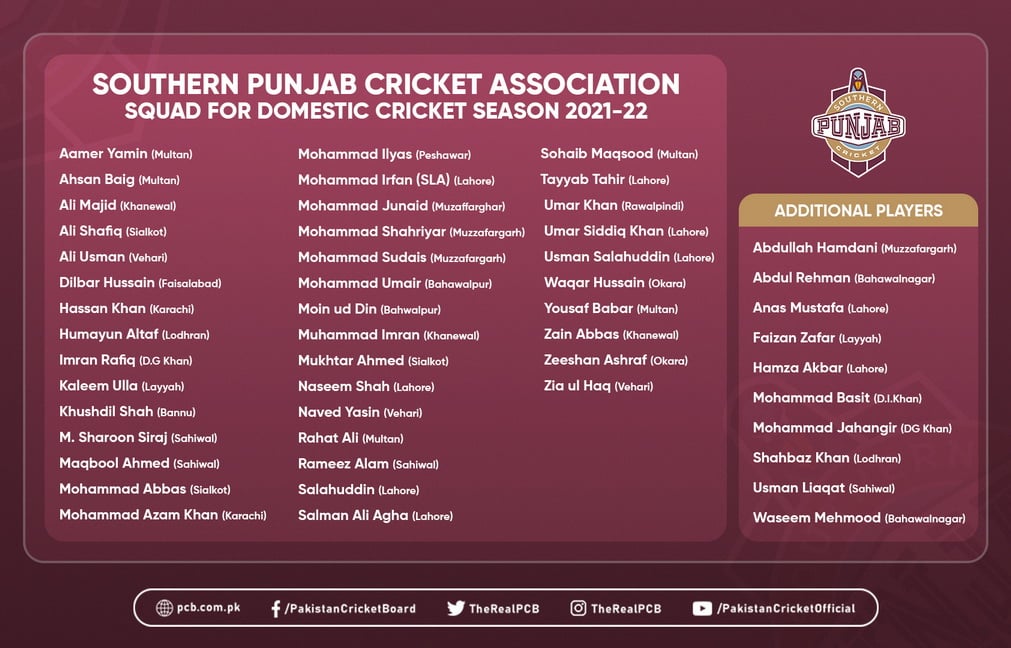