Lahore, 20 January 2020: Pakistan national women’s selection committee today announced a 15-player squad for the ICC Women’s T20 World Cup, which will be held in Australia from 21 February to 8 March. Recent performances in the international and domestic events as well as team combination considering condition Down Under were the overarching principles for the team selection.

The selectors have recalled Muneeba Ali and Aimen Anwar, while they have named uncapped Ayesha Naseem in the squad. The trio have replaced Nahida Khan, Ayesha Zafar and Rameen Shamim in the T20I squad, which lost 3-0 to England in Kuala Lumpur last month.

The average age of the side is 24.8, which also indicates the selectors’ vision and future planning. 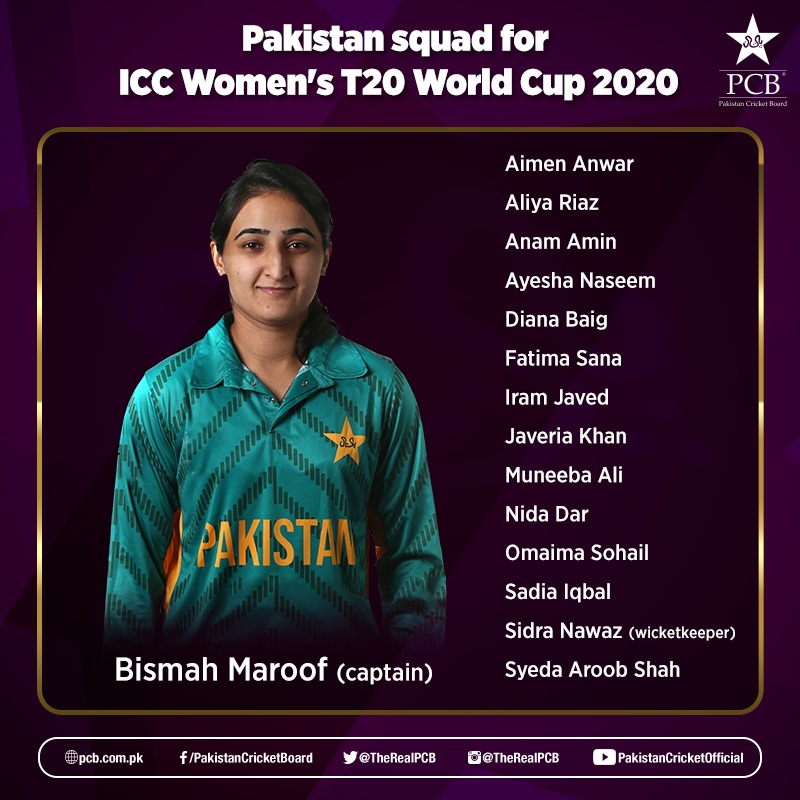 As part of event preparation, Pakistan women will depart for Australia on 31 January and will play three warm-up matches against the West Indies on 7, 9 and 11 February. Prior to their departure, the team will have an eight-day camp from 23-30 January at the Hanif Mohammad High Performance Centre, Karachi.

Muneeba, who last turned out for Pakistan in November 2018, has been recalled at the back of a prolific National Triangular T20 Women’s Cricket Championship, in which she scored 292 runs at a staggering average of 58.40. In the five innings of the just-concluded tournament, the left-handed opener scored a century in three half-centuries.

Ayesha has been inducted in the line-up for her hard-hitting abilities at the top of the order. The 15-year-old right-handed batter from Abbottabad scored 64 runs at a strike-rate of over 206.

Aimen, the right-arm medium-fast, took four wickets in five matches, bowling at an economy rate of 7.68, comes in as a new ball specialist to complement pacer Diana Baig and left-arm spinner Anam Amin in the Powerplay overs. She last played a T20I in February 2019 against the West Indies women in Karachi.

Urooj Mumtaz, the chair of the national women’s selection committee, said: “Jotting down the squad for the ICC Women’s T20 World Cup was a tough task as many players had staked a claim in the side.

“Though the players who have been left out will be disappointed and heart-broken, this, however, should act as a motivation for them to comeback more strongly. On the other side of the coin, the selection of 15-year-old Ayesha and 16-year-old Aroob Shah should be a motivation and message for all the budding youngsters.

“Furthermore, the selectors have also valued our domestic competition, while also taking into consideration the players who have been regularly part of the side since the Bangladesh series.

“The team has been selected keeping in mind the current form and performances along with the conditions in Australia and, at the same moment, we have come up with the right balance of youth and experience which will complement each other in the mega event.

“Though Sana Mir doesn’t feature in the 15-player line-up, I believe we still have the desired experience in the squad. Sana has been a phenomenal servant of Pakistan cricket while being an inspiration to many girls out there. Unfortunately, her recent performances in the T20 format were not on her side.

“The Pakistan women’s national team’s performance graph has been on the rise and this tournament serves a perfect opportunity to this evolving unit to showcase its talent as we aim to continue to move women’s cricket forward and look towards the future.”

Pakistan captain Bismah Maroof said: “I am pleased that we have come forward with the best possible line-up which has the potential to have an impressive run at the ICC Women’s T20 World Cup.

“We have tried to strike the right balance of youth and senior players. While selecting the squad we considered the recent performances in the international and domestic events.

“It was a tough decision to leave out Sana Mir. I wanted to have her in the squad over which I, along with the selection committee, had deep deliberations. We had to decide between her and the emerging players who had been impressing on all the stages.

“I respect and support the decision of the major group and hope she will continue to serve Pakistan women’s cricket in future with the same passion and energy.”

Pakistan are drawn with England, South Africa, Thailand and the West Indies in Group B.

The Bismah Maroof-led unit begin their ICC Women’s T20 World Cup 2020 journey on 26 February against the West Indies Women. The take on England Women on February 28 after which they play South Africa Women and Thailand Women on 1 and 3 March.