Lahore, 12 March 2021: Pakistan cricket selectors have continued to reward domestic performers and show faith in emerging cricketers as they named formidable sides for the upcoming challenges in South Africa and Zimbabwe where the national men’s side will play seven T20Is, three ODIs and two Tests.

The 35-member Pakistan squad will depart for Johannesburg on 26 March for the three ODIs and four T20Is against South Africa. They will then fly to Harare on 17 April for three T20Is and two Tests against Zimbabwe. The side is scheduled to return on 12 May.

Prior to their departure for Johannesburg, a training camp for the white-ball players will be held at the Gaddafi Stadium from 19 March. The players will arrive in Lahore on 18 March following 16 March PCR tests in their respective cities and will undergo further PCR tests on 18, 21 and 24 March. During the Lahore camp, the players will remain in a bio-secure environment.

The T20I and ODI sides include 18 players each with 14 players featuring in both the formats, while the Test squad comprises 20 players with eight players figuring across all three formats. These eight players are Babar Azam (captain), Faheem Ashraf, Haris Rauf, Hasan Ali, Mohammad Nawaz, Mohammad Rizwan, Sarfaraz Ahmed and Shaheen Shah Afridi. 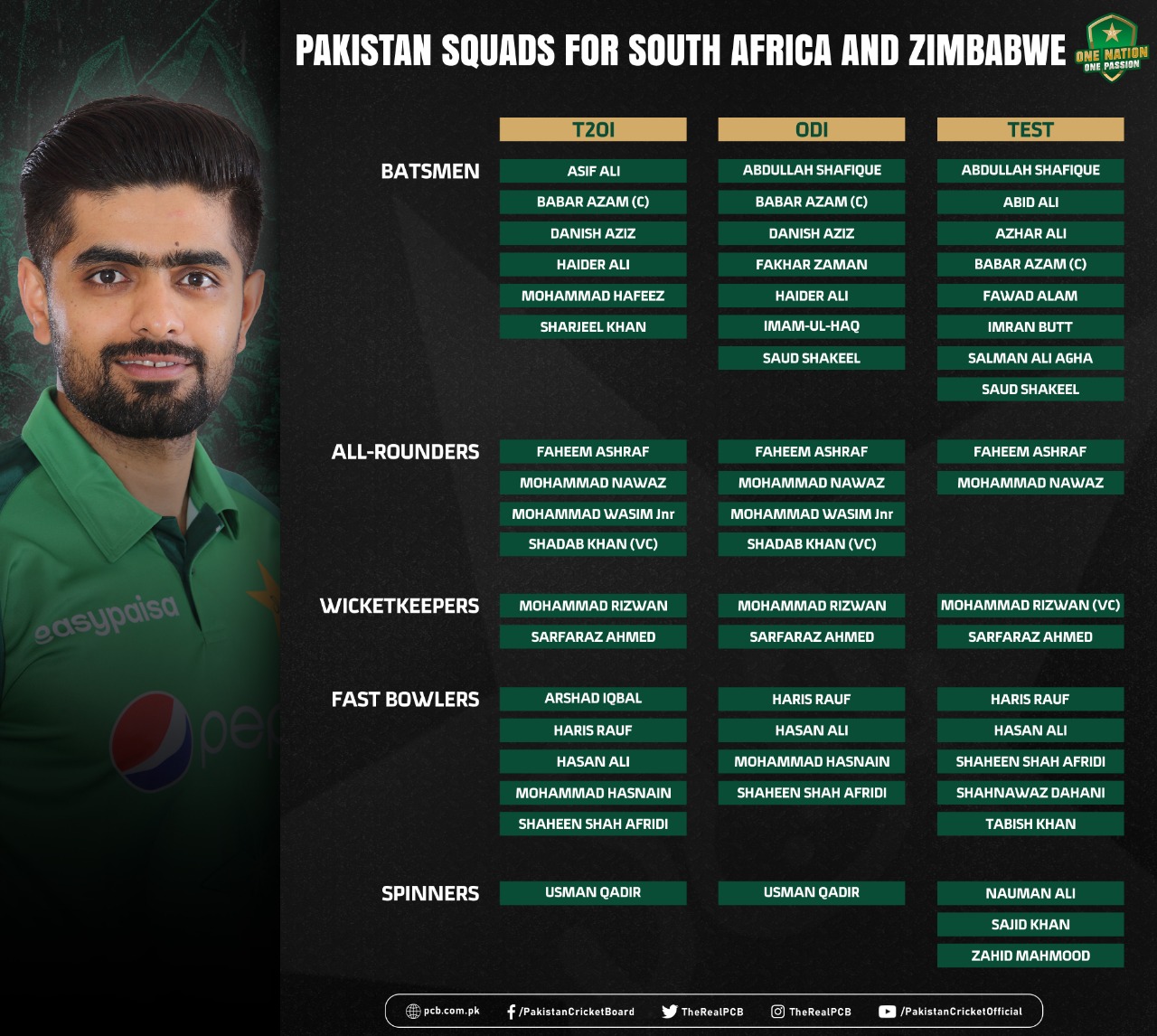 Pakistan white-ball vice-captain Shadab Khan and T20I specialist Mohammad Hafeez have returned to the side after missing the South Africa series.

In addition to the two experienced campaigners, the selectors have also recalled 31-year-old left-handed opener Sharjeel Khan to the T20I side, four years after his 15th and last T20I match. In the 2020-21 season, Sharjeel scored 233 runs in the National T20 Cup, while he was third behind Mohammad Rizwan (297 runs) and Babar Azam (258 runs) with 200 runs in five HBL Pakistan Super League 6 matches before the event was postponed.

Fast bowler Shahnawaz Dahani is the only new face in the 20-player Test squad. The 22-year-old from Larkana took 26 wickets in his debut first-class season for Sindh after picking up six wickets in the second eleven National T20 Cup. He then followed up with five wickets in the Pakistan Cup One-Day Tournament and nine wickets for Multan Sultans in the HBL PSL 6.

Two changes have been made in the 20-player Test side that defeated South Africa by seven wickets and 95 runs in Karachi and Rawalpindi, respectively. Kamran Ghulam and Yasir Shah have been replaced by Shahnawaz Dahani and Zahid Mahmood.

Chief selector Muhammad Wasim: “I want to congratulate Arshad Iqbal, Mohammad Wasim Junior and Shahnawaz Dahani on their selections in the Pakistan squads. This is an acknowledgement and reward for their talent and performances in the 2020-21 domestic season.

“Representing the country at a global stage is the biggest honour and achievement for any professional athlete. I am confident these selections for important tours of South Africa and Zimbabwe will inspire and motivate these budding youngsters to produce more impressive and consistent performances so that they can justify the faith and confidence exposed on them by the team management and selectors.

“Sharjeel Khan has also staged a comeback in the T20I squad. Although he is exactly not where we want him to be, he is not too far away. With the form he has recently shown in the domestic T20 events, he deserves an opportunity to further improve his fitness and show he still has that ability to win big matches for Pakistan.

“Yasir Shah is suffering from left knee injury and requires another six weeks to fully recover. His absence has opened a door for Zahid Mahmood, who will have a stronger case in the Test squad as compared to the T20I side following the return of Shadab Khan and presence of Usman Qadir. For a place in the Test side, Zahid will compete with Nauman Ali and Sajid Khan, who, like Zahid, were the two outstanding bowlers in the first-class Quaid-e-Azam Trophy.

“Imad Wasim has missed out on selection as we have opted to continue with Mohammad Nawaz. The all-rounder had a decent series against South Africa, taking three wickets at an economy rate of 6.10 with a brisk 11-ball 18 not out in the series finale. Nawaz deserves another opportunity to show that he belongs to white-ball cricket.

“Aamer Yamin, Amad Butt and Kamran Ghulam are unlucky to miss out on selections. Aamer and Amad have paved the way for Mohammad Hafeez and Shadab Khan in the T20I squad, while Kamran has narrowly missed out to Salman Ali Agha and Saud Shakeel in the Test side. However, the three are in the larger pool of players and will get their opportunity at some stage as we have a busy year of cricket ahead of us.

“Test cricket remains the pinnacle format and are the health-check of any cricket playing country. We have limited Tests this year with three-Test series against West Indies and two-Test series against Bangladesh planned. As such, it is imperative that we do well in Zimbabwe so that we can not only carry the winning momentum forward but also prepare for tougher series in the West Indies and Bangladesh.”

Tour itinerary (Zimbabwe schedule to be announced in due course)

12 May – Departure for Lahore from Harare