Lahore, 8 January 2022: The six HBL Pakistan Super League sides further boosted their squads on Saturday as they picked additional players and submitted partial replacements for the players unavailable for initial few matches in the supplementary and replacement draft held through a virtual session.

The 2020 edition’s champions Karachi Kings, as decided through random draw, had the first supplementary pick, and they added Sahibzada Farhan, winner of the PCB Domestic Cricketer of the Year Award 2021, to their squad.

Lahore Qalandars, who had the second pick in the first round, picked pacer Mohammad Imran Randhawa. In the next four picks; Islamabad United added pacer Musa Khan, who played for them in the 2019, 2020 and 2021 seasons; Quetta Gladiators reserved their pick; Multan Sultans picked England pacer David Willey; and, Peshawar Zalmi picked Mohammad Umar. 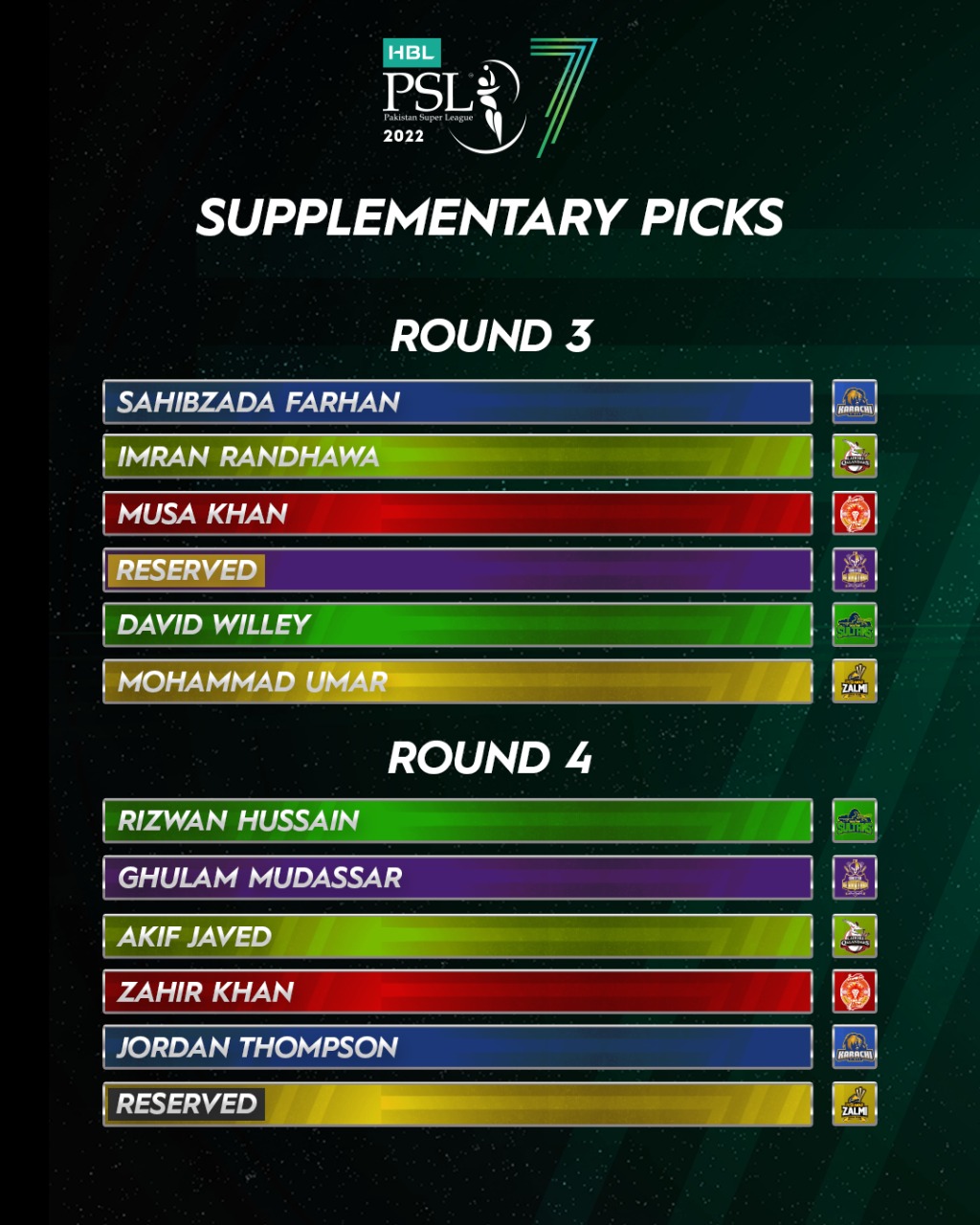 Each franchise was allowed to pick a maximum of one foreign cricketer out of the two supplementary picks.

Making the most of the opportunity to replace those players who were partially unavailable in the HBL PSL 7, Multan Sultans replaced Odean Smith with wicketkeeper-batter Johnson Charles and Rovman Powell with Dominic Drakes.

Karachi Kings replaced Pakistan U19 captain Qasim Akram, who is on the national duty in the West Indies because of the ICC Men’s U19 Cricket World Cup, with left-arm spinner Mohammad Taha Khan and reserved their pick for Tom Abell.

Qasim’s teammate Zeeshan Zamir was replaced with Mohammad Huraira, who had a terrific debut first-class season stroking a triple-century and finishing as the highest run-getter in the Quaid-e-Azam Trophy.

Karachi Kings – In supplementary round: Sahibzada Farhan and Jordan Thompson (both Silver). In replacement round: Mohammad Taha Khan (Emerging)

Lahore Qalandars – In supplementary round: Mohammad Imran Randhawa and Akif Javed (both Silver). In replacement round: Ben Dunk (Gold)

Quetta Gladiators – In supplementary round: Ghulam Mudassar (Emerging). In replacement round: Luke Wood, Will Smeed and Ali Imran (all Silver), Shimron Hetmyer (Diamond)